The good news about You’re the Worst‘s third season, which kicked off Wednesday night: Gretchen is doing much better, on the whole, than she was when clinical depression had its way with her for the better part of Season 2.

The not-so-good news about You’re the Worst‘s third season: The premiere finds Edgar and Lindsay in tough situations that’ll likely get worse before they get better, and no amount of breakfast tots or Sunday Fundays can change that fact.

Read on for the highlights of “Try Real Hard.”

GRETCHEN AND JIMMY | After an episode-opening sex scene that ends in an atypically sweet manner, the series’ central couple are back to their lovably acerbic ways. He mocks her for not washing her legs in the shower. She tells him she loves him, then grows indignant when he won’t say it back. She reminds him that he spoke the words at Becca and Vernon’s party; he counters that he was blackout drunk at the time, therefore it doesn’t count.

When Gretchen’s attempts to get Jimmy hammered again fall short, she laments her plight to Sam, S–tstain and Honey Nutz. Sam is less than sympathetic. “Be the CEO of your own life, Gretchen!,” he commands before informing her that “Dudes don’t way it with words, they say it with actions.” Oh, and the guys are having a super secret reunion show but they don’t want Gretchen to publicize it in any way.

This, of course, means that no one but Gretchen’s friends show up at the venue, a fact that enrages the rappers. They demand that Gretch fix it, so she tiptoes across the street to a Spanish-speaking storefront church, marches into the service and asks — en Español — the congregants to come to the show so there’ll be bodies in the crowd.

Jimmy is in awe of everything he doesn’t know about his girlfriend… and she realizes that he’s been peppering her with questions all episode because he finally cares enough to ask. After she explains that declaring love only means you “promise to try real hard,” he’s relieved and quickly tells her he loves her. 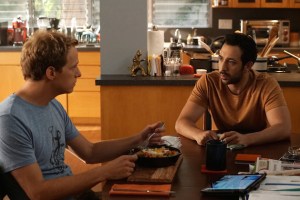 EDGAR AND DOROTHY | Life is less idyllic for Edgar and Dorothy, who are having some problems in the bedroom thanks to some of his meds. When Edgar tries to confide in Jimmy over a plate of breakfast tots, Shive-Overly recoils in horror and then halfheartedly suggests that “Your penis is clearly bored to death.” But role-playing doesn’t help, and Edgar is despondent until Dorothy assures him that she wants to be with him even if they have to take an atypical approach to pleasure. He gratefully kisses her… then hurries to the bathroom to flush all of his pills.

LINDSAY AND PAUL | Paul is all in with the idea of him, Lindsay and their kid-on-the way being a family. So he gets rid of all of his “nerd stuff” in order to build a life where he and Lindsay share everything. Lindsay swallows her discomfort with this endeavor until Paul signs them up for Red Napkin, a Blue Apron-like recipe-delivery service, so they can make dinner together every night. As he’s musing about how there will be “no surprises” in their life from here on in, Lindsay can’t take it anymore — and so she stabs him in the side with the kitchen knife she previously used to chop mushrooms. At first, the moment seems like the fantasy of a very upset, very stifled woman. But nope, it really happened.

Now it’s your turn. Grade the premiere via the poll below — then don’t forget to weigh in on the leg-washing debate — and then hit the comments to elaborate.