Question: Please tell me Nashville isn’t going to kill of Rayna. I can maybe deal with Connie Britton doing fewer episodes. But a dead Rayna? No. —Brianna
Ausiello: I honestly have no idea how Dame Connie B will be written out, although you mind find this bit of casting intel worrisome: Rumor has it Rayna will be menaced by a stalker this season.

Question: Can we get any scoop on Supergirl‘s version of Maggie Sawyer? I can’t wait to see Floriana Lima in the role. — Chelsea
Ausiello: In short, Maggie “is an ally,” says showrunner Andrew Kreisberg. As a detective with the Science Police — aka the division of the NCPD that deals with “anything that’s out of the ordinary” — “We’ll be bumping into Maggie a lot, and questions of jurisdiction will be coming up,” he adds. “Maggie is a strong proponent for alien rights, which is going to be [a theme].” (Alas, when we tried to bait Kreisberg with the notion that Maggie and Alex will at first lock horns only to later share sparks of a different kind, he… indicated nothing.) 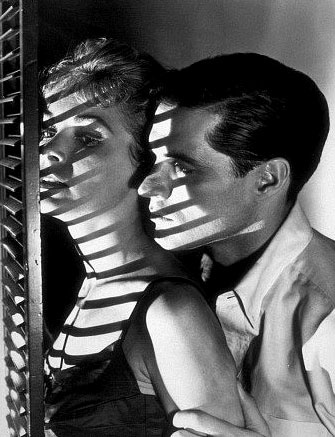 Question: I’m cautiously optimistic about Rihanna playing Marion Crane on Bates Motel. Got any other intel about her role? —Jessica
Ausiello: Just like in Psycho, the small-screen Marion will have a boyfriend named Sam who’s the sorta sexy devil for whom a woman might consider embezzling a small fortune. The A&E drama is currently looking for an edgy hunk to take a stab at the recurring role — and, if we were placing bets, we’d wager that a casting call for Marion’s sister Lila would go out next.

Question: Are ever going to see Mayim Bialik do the Blossom dance on The Big Bang Theory? —Latifah
Ausiello: Exec producer Steve Molaro isn’t ruling it out. But first, he has to find out what the eff you’re talking about. “I’m ashamed to say I’m not up on my Blossom enough to even know that there is a Blossom dance,” he tells me. “But the next time I see Mayim, I’m going to personally ask to see it and then we’ll go from there.”

Question: Will Once Upon a Time be giving Rumbelle fans any sweet, pregnancy moments — like discussing names, etc.? —Betsy
Ausiello: Maybe, eventually. But “the ride there is pretty bumpy,” warns series co-creator Eddy Kitsis. Adam Horowitz meanwhile promises moments of “reminiscing” for the oft-estranged marrieds, “and discussing what it’s going to mean when their child is born.”

Question: Will Once Upon a Time give us an explanation for Mr. Gold’s new haircut? —Rebecca
Ausiello: Though Robert Carlyle was able to lose the mustache he donned when filming this summer’s Trainspotting sequel, his indeed brought Begbie’s cropped ‘do back to Storybrooke. The loss of Rumple’s salt-and-pepper mane “will absolutely be addressed,” says Horowitz. “And the answer isn’t that he went to do Trainspotting 2.”

Question: On Arrow, how will Oliver’s role as mentor to the new team members be different from the one he had/has with Roy and Thea? —Diego
Ausiello: “The biggest difference is he’s just more experienced” coming into Season 5, executive producer Wendy Mericle says. “He’s older, and he’s been through more.” That doesn’t mean Oliver will be nice to his new recruits (“Why would he do that?” the EP laughs), but “he appreciates more the significance of being a teacher and what that means. In terms of this universe of martial arts and fighting and training people and what that means, he’s learning there’s value in being a mentor.” 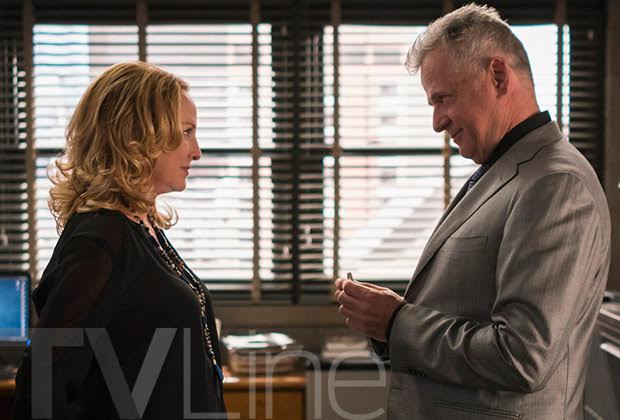 Question: Can we talk about Elementary for a moment, please? —Amanda
Ausiello: I don’t know if we can but I certainly can. The CBS drama is taking Captain Gregson’s relationship with Paige (Virginia Madsen) “to a new level” in Season 5, reveals executive producer Rob Doherty, before confirming that Madsen will reappear in Episode 3. Oh, check it out — it’s an exclusive first look at her return!

Question: Any intel on the English Rose on Supernatural? —Sue
Ausiello: Lady Toni Bevell (Elizabeth Blackmore) and her brethren across the pond certainly “didn’t start off on the right foot” with the Winchesters, seeing as how she shot Sam in last May’s finale, notes Jared Padalecki. Indeed, as co-showrunner Andrew Dabb explains, “Toni is very against Dean and Sam and has studied them and has very strong opinions about them, [which are] not positive.” That said, Dabb teases that a compromise of sorts may be in the offing seeing as how “there are other people in the British Men of Letters who want to take a different approach [with the Winchesters].”

Question: Is it possible that Vanessa A. Williams (aka Francine West) will return in to The Flash Season 3 via Flashpoint, with a different backstory? —Jen
Ausiello: “There are different characters that you will see, some [that have] passed,” co-showrunner Todd Helbing teases, adding that there is “a lot of Easter egg stuff that’s a lot of fun” in the Flashpoint arc.

Question: What can you tell us about Alaric’s upcoming storyline on The Vampire Diaries? —Anna
Ausiello: I’ll say this, Anna: Don’t shed too many tears over his recent split from Caroline. And I’ll let executive producer Julie Plec explain why: “Alaric hasn’t had the best luck with women. I don’t know if he should be jumping into anything anytime soon, but if he does, the hot nanny would certainly be viable.” (The “hot nanny” in question is newcomer Seline, played by Containment’s Kristen Gutoskie.)

Question: Stranger Things without Eleven?! Say it ain’t so! —Andrew
Ausiello: It ain’t so. Mark my words: The pint-sized, chrome-domed, Eggo-addicted super-heroine will be back in some form.

Question: Since it’s official that Pretty Little Liars is ending, which familiar faces can be expected to show up in the last 10 episodes? Wren? Melissa? Lucas? The parents? —Juan
Ausiello: Good news, Juan: Wren will be back for the final 10, as will the Liars’ parents. And even though you didn’t ask, here’s some bonus scoop via exec producer Marlene King: We’ll finally see the flash-forward scene from the 6A finale (where “he” is coming after the girls at Rosewood High) play out in real time.

Question: Any hint on the recent Blind Item you told us about? —Eric
Ausiello: It’s not a show on CBS, which leaves ABC, Fox, NBC and The CW. And the series in question is back on the air in the next month. 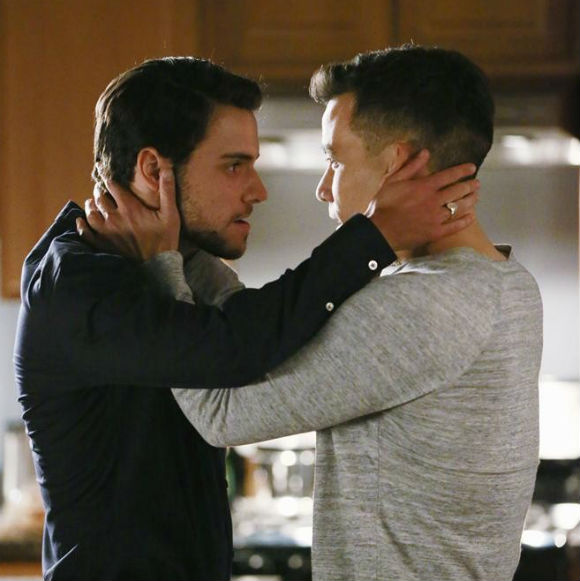 Question: Any scoop on my favorite How to Get Away With Murder couple, Connor and Oliver? —Nick
Ausiello: When last we left the lovebirds, Oliver secretly deleted Connor’s acceptance letter from Stanford. In the Season 3 premiere, “We’re going to find out if Connor ever found out about that and how he feels about it,” reveals showrunner Peter Nowalk. “That is the big hanging chad in their relationship. Otherwise, things are pretty happy. But the show doesn’t really thrive on happiness.”

Question: What’s next for Hawaii Five-0’s Kono? Will she and Adam finally settle down? —Ayaan
Ausiello: As this Instagram sneak peek from showrunner Peter M. Lenkov suggests, happier times do seem to be ahead. As part of our upcoming Fall Preview Spectacular, Lenkov said that as Season 7 unfolds (starting Friday, Sept. 23), “Kono is finally reunited with Adam and sorts through life’s priorities — rebuilding her bond with her husband being No. 1.”

Question: Is there any indication that Sara Ramirez will be returning to Grey’s Anatomy in the future? Is she really taking a break or is she through with the show? —Tricia
Ausiello: Zero indications at the moment, but my gut is telling me we will see Callie at least briefly in Season 13. 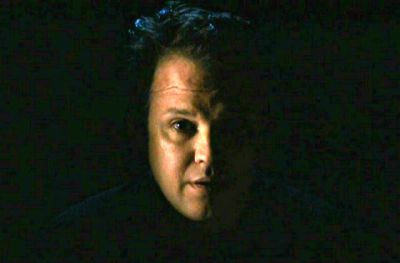 Question: Can you tell us more about what’s coming up for Bones‘ Booth and Brennan, #Hodgela and the gang? —@KATIARABREU
Ausiello: Zack’s return may threaten B&B’s lives but it will not imperil their relationship. “The Zack [storyline] is certainly going to place them in jeopardy and certainly place them with different viewpoints,” concedes co-showrunner Jonathan Collier, “but is it going to challenge their marriage? I think their marriage is stronger than that.” Collier goes on to acknowledge that there are “many, many threads we want to tie up” during the series’ final season. Like, perhaps, a certain unsolved alarm clock mystery? “That has not been addressed,” the EP concedes. “There’s also Booth’s spiritual debt… a debt of killing that he wanted to pay off.”

Question: Do you have any Linstead-centric Chicago P.D. spoilers? —Tara
Ausiello: Last season’s road-trip episode crashed and burned, but producers seem intent on righting that wrong in Season 4. “There won’t be a designated storyline where they’re off on a road trip, but we want to dig a little bit more into [their respective backstories] as it relates to both of them,” showrunner Matt Olmstead tells TVLine. “That’s a focus for us this year.”

This AAnd That…
♦ When it comes to casting its Lost in Space remake, Netflix, I’m told, is aiming high. “Too high,” sniffs one industry insider.
♦ Family Ties matriarch Meredith Baxter is checking into Code Black for an episode later this fall. As EP Michael Seitzman explains, her character’s grandson, along with some of his friends, brush up against poison oak while on a camping trip. The twist? “It turns out it’s measles,” he explains. “But the real complication comes when [Baxter’s alter ego] also gets measles, because the measles vaccine wears off by a certain age and she is susceptible to it. The complications for her are far more grave.”
♦ Sleepy Hollow‘s Washington D.C.-set fourth season will look surprisingly authentic for a show that shoots in Georgia. Rumor has it Crane & Co. will head to the nation’s capital next month to capture several episodes’ worth of exteriors.
♦ In case you lost count, the guest cast for The Big Bang Theory‘s Sept. 19 premiere includes Katey Sagal. And Jack McBrayer. And Dean Norris. And Christine Baranski. And Laurie Metcalf. And Judd Hirsch. And Keith Carradine.