Flash fans, we know what you’re thinking: Barry has to fight yet another evil speedster this coming season?

And while it’s true that one of the hero’s two main enemies will be the “speed god” Savitar (glimpsed in a recent promo), Big Bad No. 1 will take on a battle approach not yet explored on the CW drama.

“[Season 3] is more about psychological warfare,” executive producer Aaron Helbing previews. Besides, “everything about [Savitar] is different than Zoom or Reverse-Flash,” EP Todd Helbing adds. “I can’t go into too much detail, but he’s quite a bit different.” 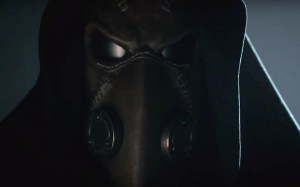 As if one bad guy wasn’t enough, Barry — amid the Flashpoint of it all — will also face off with Dr. Alchemy (pictured right, voiced by Saw‘s Tobin Bell) as the series juggles two huge villains for the first time.

“[We’re] trying to have the powers that they both possess play off of each other,” Todd Helbing explains. “It’s not just, ‘Oh, I have to catch this guy and take him down.’ It’s like, ‘Crap, now there’s this other guy, Dr. Alchemy,’ who has these transmutation qualities [via] this Philosopher’s Stone. You start to learn what he does with this stuff and how the both of them are coexisting.”

For the Scarlet Speedster, the problem becomes, “‘Just when I think I’ve taken down this guy, I’ve got this [other] dude to worry about, and vice versa,'” the EP continues. “It’s like flanking.”

Although Barry thus has his superhero work cut out for him, don’t expect the show to get gloomy again. As the result of a sinister threat and frequent bouts of doubt and angst, Season 2’s “last 5 [or] 6 episodes were pretty dark,” Todd Helbing admits. “Zoom, in general, was dark. It even got darker than we probably anticipated. So we’re making a conscious effort to go back more toward the tone of Season 1.”

The Flash opens Season 3 on Tuesday, Oct. 4, kicking off the return of The CW’s superhero slate (which now also features Supergirl).