Returning for the second half of its second season Sunday, Fear the Walking Dead followed Nick down the long and perilous road to Tijuana. Yes, go ahead, you can say it. “How long and perilous was it?” It was so long — 100 miles — and so perilous — Madison’s son was attacked by everything from sharpshooters to cacti — that, at times, it didn’t look like he was going to make it. Did he? If you don’t already know, read on and find out.

ON THE ROAD AGAIN | As “Grotesque” began, Nick said adios to one of Celia’s compadres as well as the boy she hoped to reunite with his father — the ex-junkie is strangely good with kids — and set off on foot for Tijuana. As you’d imagine, things went south fast. While camped out in a house for a night, he was awakened and violently evicted by a bat-wielding woman who was hysterical enough to be a telenovela superstar. Since she didn’t even let him grab his jug of water, he was then forced to hydrate whenever and wherever he could, whether that meant breaking open a cactus — ouch! — drinking his own urine or snagging a bottle from an abandoned car. (Nick being Nick, he didn’t mind that there was a walker in the passenger seat.) Right after finishing the bottle and snatching a radio from the vehicle, he hid and watched as three hombres sped up in a jeep and dispatched not only a walker but a fellow survivor — and laughed about it! So, naturally, that was when the radio got a signal! 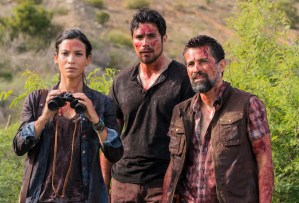 MAN ON THE RUN | Tipped off to Nick’s presence, the three amigos opened fire, sending our hero running into the wilderness, where he was attacked by wild dogs — and bitten by one. After reaching (relative) safety atop a convenient van, he watched as the pooches made the fatal mistake of going after a pack of walkers as if they were mailmen. When the sound of a horn drew away the pack, Nick — ugh — sampled their leftovers, then joined the walkers on the highway. Maybe due to dehydration, maybe because he loves walkers that much or maybe owing to a combo of both, he began to imagine that they were saying he was one of them and inviting him to go with them. That being the case, when the Jeep wranglers showed up again 40 miles outside of Tijuana and the walkers managed to get two of them, I half expected Nick to join in the feast. (Since he didn’t, maybe he’s not yet quite as far gone as, say, Chris.) Nearby, three people — Luciana, Francisco and an as-yet-unnamed guy — observed through binoculars. Since Nick wasn’t the individual for whom they were looking, Luci refused to help him, even when he collapsed in the road.

MR. T-JUANA | Miraculously, it rained just in time to keep Nick from dying of thirst. Also miraculously, he managed to complete his long and perilous journey to Tijuana. There, while tending to his dog bite, he was approached by Luciana & Co., who escorted him to Alejandro (who we’ll learn later isn’t the doctor for whom he could easily be mistaken but a pharmacist). Hearing from Nick that he wanted to be “where the dead aren’t monsters,” the doc threw open his clinic’s doors and showed him that, just outside, there was what appeared to be a thriving community — basically, a Mexican Woodbury. Also of note: The flashback-filled hour revealed how close Nick and Gloria (R.I.P.) had been, in and out of rehab, and suggested that it was the sudden death of his father that had kept the addict from remaining clean and sober post-treatment.

So, what did you think of “Grotesque”? Grade the Season 2B premiere in the poll below, then hit the comments with your review.