Be careful what you wish for, Nick.

In the midseason finale of Fear the Walking Dead, the disillusioned junkie broke away from his family in hopes of finding more like-minded survivors who don’t view the infected as monsters. And, when the Walking Dead prequel returns for the back half of Season 2 on Sunday, Aug. 21 (AMC, 9/8c), he’ll get what he wanted — and a whole lot more than he bargained for!

Here, showrunner Dave Erickson analyzes for TVLine the dangers of Nick’s new addiction, previews the “extreme belief system” at play in la colonia and fleshes out the series’ new characters.

TVLINE | Before we arrive at Nick’s destination, let’s talk a little bit about how we got pointed in that direction. His fixation with the infected is, basically, crazy, right?
I don’t know if it’s craziness so much as an addiction — he’s found his replacement for heroin. I think that there’s an actual physiological reaction he gets when he’s walking among the dead. So it’s less that he’s lost his mind and more that he’s found his new fix.

TVLINE | Does that make Tijuana kinda like his new drug den?
When we get to the end of Episode 8 [the midseason premiere], we’ll see that he finds a place that I think enables him to a certain degree. He’s always had a very close relationship with death, largely because of the death of his own father. It’s almost like, from an emotional standpoint, this closeness to death is a way to try to reconnect with his father, so that’s something we touch on over the course of the back half. Then, strictly from an addictive standpoint, he likes being close to it because there is an adrenaline rush that comes from it. There is a logic to it. It’s a junkie logic, but it is a logic.

TVLINE | What is it actually like for Nick in Tijuana?
The belief system that he finds when he gets to the colonia is somewhat extreme. You see that in Episode 9. 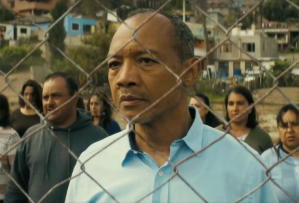 TVLINE | Right — primarily owing to Alejandro, the man to whom Luciana introduces Nick in Episode 8.
He’s a pharmacist. He says this in 9. And, as a pharmacist, he was someone in the community who had a certain degree of respect and was almost like a father figure — because, in some neighborhoods, the pharmacist is the local doctor for all intents and purposes. So it makes sense that he would become something of a central figure to the people of the colonia once the apocalypse hits. But we find out in 9 that there’s something more to him [that] has elevated him and given him almost a mythological status in this community.

TVLINE | What is Luciana’s relationship with Nick like?
I wouldn’t say that he potentially finds love, but he does find in Luciana a woman who has become orphaned in a way — but not by choice. I think it’s an apocalyptic loss. What’s different is that Nick chose to walk away from his family, whereas Luciana did not. 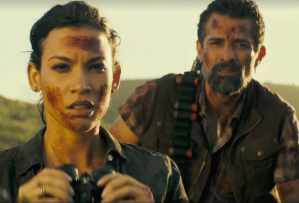 TVLINE | From Danay Garcia’s interview with Michael Ausiello at Comic-Con, it seems like Luciana is going to be a badass.
What I love about her is, she’s very pure in her belief. She believes in Alejandro completely. And I think whenever there is great faith, there’s ultimately going to be a great fall. That’s part of the sad trajectory with her but also with Alejandro. And Nick will possibly leave the colonia in a much different place. Part of his journey when he gets there should alter and shift his perception to a degree. That’s the goal.

What are you hoping will happen in Season 2B, Fear fans? Hit the comments.