The Flash‘s latest villain is a real head-turner.

Ashley Rickards (Awkward) will guest-star in Season 3 of the CW series as The Top aka one of the most dangerous members of the Rogues gallery, E! Online reports.

Rickards’ Rosalind “Rosa” Dillon — who in comics lore was known as the male character, Roscoe Dillon — has the power to make people’s heads spin (just like The Flash’s time-travel twists!). She will debut in Episode 4 as “the Bonnie to Mirror Master’s Clyde” (played by Aquarius‘ Grey Damon).

The Flash opens Season 3 on Tuesday, Oct. 4, kicking off the return of The CW’s superhero slate (which now also features Supergirl). 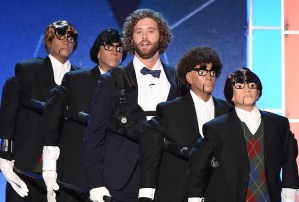 Critics’ Choice Awards, which honor both television and film entertainment, this year will kick off awards season, airing Sunday, Dec. 11 at 8.7c, on A&E. Silicon Valley‘s T.J. Miller will return as host.

* Shameless has tapped June Squibb (Modern Family, Getting On) to recur in Season 7 (premiering Oct. 2) as Etta, a salty and peppery 80-year-old Southside Chicago woman who has owned the neighborhood laundromat forever, TVLine has learned.

Hi! Dropping by https://t.co/x8mMWMv9et to let everyone know that after 5 seasons & 110 episodes, we are ending @ComedyBangBang TV on @IFC