At least until you get to the poll at the bottom of this recap, no one can say that Season 1 of Animal Kingdom didn’t go out with a bang: By the end of “What Have You Done,” one character had eaten lead, another was in handcuffs, and J had revealed whether he would be playing for Team Cops or Team Robbers. Which was it? Read on and find out!

SCAPEGOAT | As the episode opened, Smurf was as concerned about why the Codys’ stolen loot hadn’t moved in two days as Baz was about Catherine. To keep him from getting anything more out of Lena than hazy recollections of a man driving Mommy’s car, Smurf produced the payoff money that Vin had returned and said that the ex-con had threatened them all — especially Catherine.

That being all Baz needed to hear, he had Pope lure his fellow jailbird into an ambush, then beat him to within an inch of his life. When Vin refused to either cop to killing Catherine or all-the-way croak, Pope sent Baz home. “I’ll take care of it,” Andrew promised. Only his idea of doing so wasn’t to finish the job, it was to drop off his barely-breathing old pal outside a hospital. Yeah, like that isn’t gonna come back to haunt him! 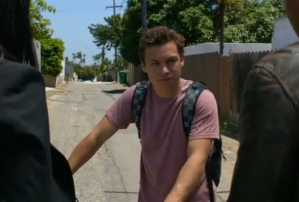 RAISED STAKES | After J was ordered by Smurf to dump Alexa, lest the Codys’ criminal empire get sucked into a Mary Kay Letourneau mess at his school, Sandra and Patrick reminded the teen — as if what, he’d forget? — to let them know the minute the dough showed up at his grandma’s. Later, he called his teacher on banging him just to get him to rat out his family but let her reassure him that what they had had become real.

Meanwhile, Paul showed up at Casa Cody and informed Smurf that there was a slight delay in moving the money. And, before she could say, “Tell me something I don’t know,” he added, “I’m the one that delayed it.” However, as soon as she agreed to increase his cut from $100k to $150k — you know, just so he’d “feel respected” — then, the plan would get right back underway.

COP-BLOCKED | True to his word, Paul subsequently did get the money moving, and after some messy, Laurel-and-Hardy-esque difficulties retrieving the loot, Deran and Craig made it home to celebrate — at least until J confessed to Smurf that he was being pressured to tip off the police and instructed her to hide the cash. 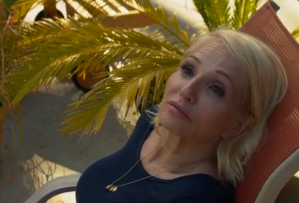 Next thing we knew, the house was being (pointlessly) raided, and Yates was ready to send J up the river for choosing robbers instead of cops. Unfortunately for her, the minor had recorded Alexa admitting that she’d shagged him on the detective’s orders. Unless Sandra wanted the D.A. to find out, that was check and mate!

IN THE CROSSHAIRS | As the hour neared its conclusion, Paul returned to Casa Cody naively thinking Smurf would send him home with $150k rather than deposit his cut in a bus-station locker weeks later (as any sensible criminal would — duh). Of course, all he left with was a disturbing eyeful of Nicky with Craig.

Next, Smurf meant to chew out J for lying to her but mostly wound up praising her grandson’s “brass balls” and cunning. “You play your cards right, you can do well with us,” she said. And, as a token of her admiration, she gave him — what else? — a gun (which he ultimately looked tempted to use on Nicky’s new boyfriend, didn’t you think?). 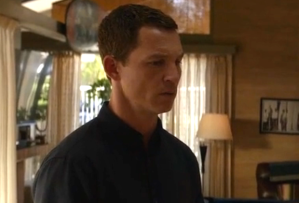 DIVIDED THEY FALL? | Finally, Pope had it out with Smurf over Catherine and the fact that, although it was him that Mom turned to for “all the dark and terrible s—,” Baz had always been her favorite — and he wasn’t even her real son. In the end, Pope declared that he wanted his cut all at once (vs. the usual installment plan) and intended to get his own place. Smurf, he argued, was “sicker than I’ll ever be.” He just might be onto something there, too.

Anyway, off that confrontation, Smurf shot and killed Isaiah; J watched as Sandra and Patrick arrested Alexa; and Pope lied to Baz that nope, Vin hadn’t said anything “at the end.” (Then again, even if Pope had killed Vin, what could he have said with his mouth as full of blood as it was?)

So, confession: After my lukewarm initial review of the show, I wound up getting hooked. In fact, I’d give the finale a solid B. How about you? Grade it in the poll below, then hit the comments.