If first impressions last, Animal Kingdom is in trouble.

Based on a 2010 Australian movie, the now-SoCal-set TNT drama is well-acted, and the pilot (June 14, 9/8c), sharply directed by co-executive producer John Wells (The West Wing). But the moment it introduces the Codys — a family of outlaws headed by Ellen Barkin as a toughie nicknamed (no kidding) Smurf — they work overtime to make it clear that they’re not just badass, they’re bad, period. Middle son Craig (Ben Robson) and kid brother Deran (Jake Weary, A Deadly Adoption) are a–holes on the highway. They’re a–holes in the ocean. They’re a–holes at their own backyard barbecue. Basically, they’re not people with whom you’d spend time if you didn’t have a gun to your head. (And, given the thieves’ fondness for firearms, that’s not outside the realm of possibility…) 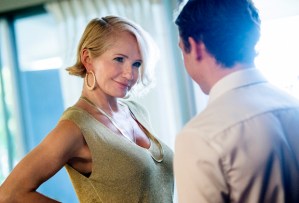 So when, upon the fatal overdose of Smurf’s estranged daughter, the crime lord takes in 17-year-old grandson J (Finn Cole, Peaky Blinders), you get the queasy feeling that you’re watching a lamb being invited to supper slaughter by a pack of wolves. It can’t end well for him. Hell, in the premiere alone, Grandma puts on one of the kid’s mom’s blouses and all but dares him not to admire her breasts, he gets roped into his first grand theft auto, and his girlfriend is put in a position so creepy, it’ll give you nightmares.

Smurf’s right-hand man, Baz Brown — played by Scott Speedman, who can’t help but be likeable — shows signs of having a soul. So of course no one listens to him. And he’s a pushover, anyway, for Smurf’s oldest boy, Pope (Shawn Hatosy, Fear the Walking Dead). The guy’s freshly sprung from prison after doing three years on a six-year sentence for bank robbery and, to put it mildly, a little off. Yet Baz still gives him a (peripheral) job to do on the gang’s next heist. 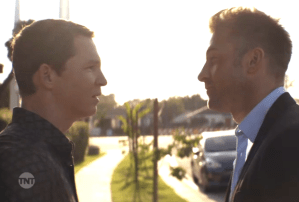 When the job goes down toward the end of the two-hour opener, it’s hard not to root for the Codys to get busted — or worse. And that seems like it could be a big problem for the series going forward. Bad can be good. It can be fun. It can be thrilling, even. That’s been proven a million times over by characters as diverse as Dallas’ J.R. Ewing and Dexter’s title killer, Buffy the Vampire Slayer’s Spike and Empire’s Cookie. The thing is, we have to like the baddies. Maybe you’ll dig the Codys. I didn’t.

The TVLine Bottom Line: Sorry. A show can’t be a guilty pleasure if it leaves out the “pleasure” part.