Amazon on Sunday announced that it will be releasing Transparent Season 3 as well as three new comedies — including one from Woody Allen — in September. You know, because there’s not enough TV at that time of year.

First up is One Mississippi (Sept. 9; watch trailer), created by and starring comedian Tig Notaro as a woman who returns to her childhood hometown to deal with the unexpected death of her mom. Casey Wilson (Happy Endings) co-stars.

Fleabag, a British import starring Broadchurch‘s Phoebe Waller-Bridge and Olivia Coleman, drops Sept. 16 and follows an unhappy woman struggling with modern ways of living in London. (Watch trailer.) The third season of Transparent — which has already been renewed for Season 4 — arrives the following Friday, on Sept. 23 (trailer embedded below).

Closing out a month of premieres on Sept. 30 is Allen’s 1960s-set Crisis in Six Scenes, a six-episode vehicle co-starring Miley Cyrus and Elaine May. (Watch a sneak peek.) 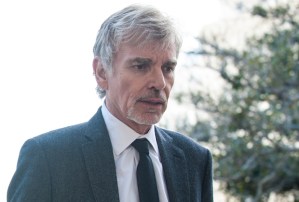 Which of Amazon’s premieres are you looking forward to the most?