Grey’s Anatomy Season 13 will pick up right where the May finale left off — which will be a pretty neat trick, seeing as newlywed Amelia’s portrayer is now pregnant.

“We are picking up right where we left off, which is hilarious, because I was in a somewhat different geometric state,” Caterina Scorsone quipped at ABC’s Television Critics Association press tour party, while rubbing 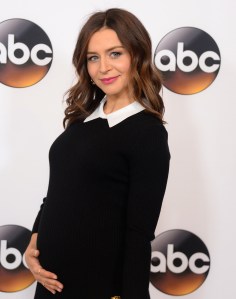 her budding baby bump. (On Thursday she announced that she is expecting her second child with husband Rob Giles.)

Doubtful that Grey’s will write in her pregnancy (as Private Practice did years ago, her first time around), the actress suggests that maybe Amelia simply overdid it with dessert at her and Owen’s wedding reception: “The cake was fantastic!”

The ABC drama will have at least another episode to start playing hide-the-bump (as it did fort much of Season 12 with Jessica Capshaw), since Owen and Amelia “are not in a ton of the premiere,” Scorsone shares, but instead are (getting) busy off-screen with their wedding night.

“Most of the drama that can be seen on network television is happening elsewhere,” she says with a laugh. 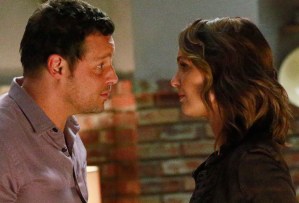 Season 13 drama, Scorsone was able to tease “a huge storyline focusing on Alex and Jo,” whose relationship got rocked in the finale by the heart-crushing reveal that Jo has been living under a false identity, to elude an abusive husband.

“It got messy for them,” Scorsone says, “but that’s going to become a really multi-layered story that has social and personal overtones…. It’s a real opportunity to explore some important issues.”