Matt Letscher will be spending a lot of time in that Reverse-Flash suit this fall, having joined The CW’s Legends of Tomorrow as a series regular while also playing a role in The Flash‘s Flashpoint arc.

The good news on that front is that he now has a supersuit to call his own, having previously “shared” one with The Flash‘s Tom Cavanagh.

“I did get my own suit this year, so I hope they put it to good use,” Letscher tells TVLine. The original Reverse-Flash suit “was built for Tom, who is probably two inches shorter than me and a lot skinnier, so you can only imagine the sausage casing it felt like when I tried to get into that!”

Letscher first got word that he would be needed this fall back in February, just as he was seeking a new “home” during pilot season. “It was pretty exciting,” he recalls. “Having not only worked on The Flash before, but having worked with Greg [Berlanti] and Marc [Guggenheim] and Andrew Kreisberg on Eli Stone before it, anytime I get a call from them, it is very welcome.”

On Legends, Letscher’s sinister speedster will be helping lord over the Legion of Doom, which is also composed of Captain Cold (played by Wentworth Miller), Malcolm Merlyn (John Barrowman) and Damien Darhk (Neal McDonough) — though it’s not as if they will tool around time as a fearsome foursome. “We’re not going to be driving around in our Legion of Doom-mobile together or grabbing lunch,” the actor laughs.

As for whether the Legion makes camp in a swamp-based hideaway (as in the Challenge of the Super Friends cartoon), we can only hope. After his Legends role was announced, Letscher says, “A friend sent me a picture of the old Legion of Doom headquarters, saying, ‘Ha-ha — you live in a helmet in a swamp!'” 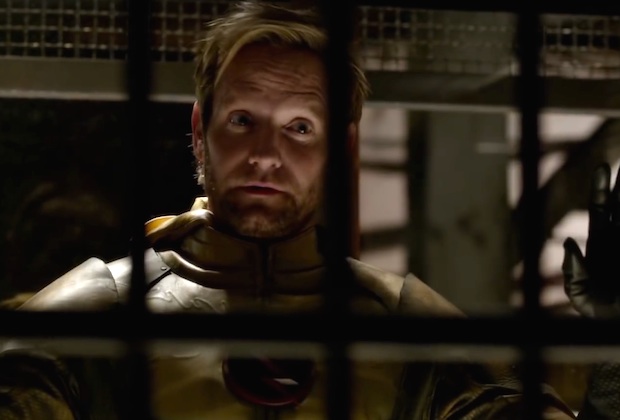 to The Flash, Letscher agrees that the Season 3 trailer shown at Comic-Con was plenty “dope,” though he was a bit surprised to see the fresh footage of him weaved in so quickly. (When I suggest that they probably wanted Eobard in the trailer to officially dub Barry’s new existence “Flashpoint,” he concurs, saying: “That’s like a classic [Andrew] Kreisberg moment for me, such a great literal highlight to the comic books. It was a lot of fun to see it play out.”)

As suggested by said trailer, Letscher affirms that Reverse-Flash “never misses an opportunity to taunt Barry,” especially as his adversary tries to make sense of the alternate reality he spawned by going back in time to save his mother’s life. What is Eobard’s larger role in Barry’s emotional odyssey? “I can say that he’s definitely central to the overall problem, and that Barry needs him,” Letscher carefully shares.

And Eobard in turn needs Barry… for a good, bad-natured laugh. “To see Barry in that much eventual pain,” Letscher says, “causes him a great deal of joy.”

Want more scoop on Legends, The Flash or any other show? Email insideline@tvline.com and your question may be answered via Matt’s Inside Line.