“Part of the journey of the characters this season is about finding their relationship in a new place,” showrunner Courtney Kemp tells TVLine during a set visit in February. The Starz drama is filming on location at a diner in New York’s Meatpacking District; earlier, as Kemp watched a scene play out from behind a video monitor in a darkened corner of the eatery, two characters had a very frosty, very brief conversation that abruptly ended with one of them exiting the restaurant in a huff.

Telling you who was involved, even as chill-by-Power-standards as the scene was, would be a spoiler — given that the series’ stakes remain as high going into Season 3 as they were in 1 and 2. James St. Patrick, played by Omari Hardwick, may think he’s out of the drug game for good, but that doesn’t mean everyone in his life sees things the same way. At the top of that disgruntled list? His former right-hand man, Tommy, who aims to fill Ghost’s considerable vacancy in Lobos’ operation. 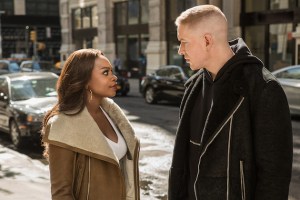 “Tommy is no longer under Ghost’s sway in the way that he was,” the executive producer continues over coffee at a café near the day’s shoot, acknowledging that the two men likely will never be completely able to quit each other. “This is fraternal love. It’s not romantic, but the idea that you love someone as your family, no matter what they do.”

Indeed, the premiere finds Tommy “really, really at odds” with Ghost, Joseph Sikora says, “and that’s not changing.” In fact, when we ask whether the two men will continue their push-pull for the foreseeable future, Sikora smiles. “That’s if Tommy survives the whole season,” he teases. “Yeah, it’s a possibility.”

Kemp isn’t any more reassuring. “There is a lot of death this season,” she says, noting that “several major” fatalities happen “in a row” in the episodes to come. But at the same time, “There is a lot of romance, a lot of sex this season. There are a lot of conversations about the meaning of love.” She laughs. “I am always trying to get some cool philosophical stuff in there while blowing s–t up.”

Which brings us to Ghost/James/Jamie and his Asssistant United States Attorney girlfriend Angela, who seem like they’re in a good place as the premiere begins but who are still keeping big secrets from each other: He doesn’t know Greg has made her his target, she doesn’t know what went down between Jamie and 50 Cent’s Kanan (who, as the premiere starts, is still MIA and presumed dead). “The moment he finds out what she is and she finds out what he is, they should just say, ‘It’s been nice. I will meet you to f–k every occasional Tuesday, [but] this cannot work,'” Kemp adds. “But they aren’t those people.” 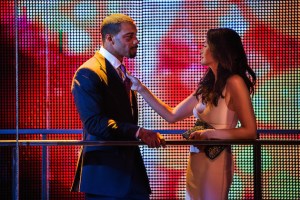 In fact, says star Lela Loren, who plays the conflicted AUSA Valdes, the pair’s deal to ignore each other’s pasts might just be the thing that drives them apart in the end: “Love is really, in some ways, trying to experience and foster real intimacy with another human being. And at the top of the season, they’ve set up a bargain where that can’t even happen.”

“It’s a bad bargain,” Hardwick says later that day, during a break in filming. “Courtney has said that consistently, and I think she’s right.” But his character has even bigger problems, he adds: He’s starting to realize he can’t control every single detail of his life — his on-the-books nightclubs, his highly suspicious wife Tasha (Naturi Naughton), his sneaking feeling that someone is gunning for him hard — and that worries him. Greatly.

“It’s been a very different armor for me to wear,” Hardwick says. “I’m really cognizant of the cracks in the armor now. I wasn’t as much, before, playing Ghost.” But as Jamie, who can’t seem to slip the near-constant pull of his illicit life as he attempts to become legit? “Now, there’s a lot of cracks there,” he says.

Power returns for Season 3 Sunday at 9/8c on Starz. Hit the comments with your predictions for the season ahead!