Warning: This post contains spoilers from Outlander‘s Season 2 finale (and slight ones for Season 3).

Sing me a song of a lass that is gonna do it all over again.

Outlander‘s season finale on Saturday ended on a hopeful note: After learning that Jamie actually didn’t die on the field at Culloden like she’d feared, Claire knew that she had to go back through the stones to reunite with the love of her life. (If you missed the episode, rest assured: She didn’t immediately jump into the circle and disappear. These things take planning, after all.)

The extended episode leading up to that moment took place both in the late 1960s, as Claire, now a widow, and her adult daughter, Brianna, attended the Rev. Wakefield’s funeral in Scotland. There they ran into Roger, now all grown up, who took a fancy to Bree and invited the women to extend their visit a bit longer.

Meanwhile, back on the eve of the battle, Claire and Jamie wound up killing Dougal when he walked in on them, and then attacked them for, talking about poisoning the prince in order to stop Culloden from happening. Knowing he’d have to answer for what he’d done, Jamie spirited Claire back to the stones and insisted that she return to Frank and safety. When she protested, he revealed that he knew she was pregnant again, so she had to go for both her and the baby’s sake. So the Frasers kissed, cried and had sex one last time, then Jamie stoically walked his wife into the circle at Craig na Dun. 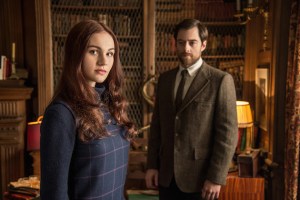 Back in the ’60s, as Roger and Bree got to know each other better — and met the pre-time-traveling Geillis Duncan, aka Gillian Edgars — Claire finally said farewell to Jamie’s memory by visiting Culloden. But when Bree asked for Roger’s help investigating an incident Frank mentioned in a letter to the Rev. Wakefield, she eventually came to the conclusion that she was the product of a years-long affair Claire had with another man.

Confronted, Claire tearfully confessed that Bree’s father was an 18th-century Scot named James Fraser. Bree treated this idea as sheer lunacy… until she, Roger and Claire witnessed Gillian/Geillis travel through the stones mere feet from where they stood. Shortly after, Bree and Rog showed Claire proof that Jamie hadn’t died with the rest of the poor souls during the terrible battle. And a shocked Claire suddenly knew exactly what she had to do.

As soon as we saw the finale, we knew what we had to do: Get executive producer Ron Moore on the phone to talk about the Frasers’ goodbye, Dougal’s demise, Roger and Bree — and absolutely anything he was willing to tell us about what he has planned for Season 3. (If you haven’t read Voyager, aka the third book in Diana Gabaldon’s series of novels, most of what Moore says won’t spoil you for Season 3. But if the words “print shop” have any meaning to you, you’re gonna want to read on.)

TVLINE | Talk to me about how you condensed the rest of the Dragonfly in Amber novel into this last 90 minutes of the second season.
It all came from the decision to open the season in the 1940s, and going from Claire and Jamie on the ship sailing off to France. Jumping from that to 1968 was too big of a narrative leap for the TV audience. I thought, let’s start a little bit more chronologically. Let’s start in the ’40s. It’s a huge thing already to see that Claire returned to the 20th century, and left Jamie and is pregnant, and that Culloden was a disaster, so let’s start there. But when do you tell the 1968 story? So I said, “We’ll catch up to it at the end of the season, and we’ll intercut the last beats of Jamie and Claire at Culloden and him sending her back in time.” It was a big structural choice that we made at the very beginning of the season.

TVLINE | Did you see a lot of people for the roles of Roger and Bree, and what was it about Richard Rankin and Sophie Skelton that really nailed it for them?
We saw quite a few people. It was a big decision, because these characters become big players and definitely permanent parts of the family as the series goes forward, so it was more complex than just casting a guest-star role. They both just nailed it. We saw their audition tapes and, much in the same way as when we saw Sam [Heughan] and Caitriona [Balfe]’s audition tapes, you went, “Oh wait a minute, maybe this is who they are. I see the character for the first time.” Then we did a chemistry test where we had Roger and Bree on camera together. Once that worked, we felt like we had all of the pieces.

TVLINE | In the book, Claire is present for, but not directly involved in, Dougal’s death. In the finale, she helps Jamie push the blade into his uncle. Why the change?
We felt that when you saw it on screen, you would be struck differently than you were on the page. If you watch the scene play out on the screen [the way it does in the novel], Claire would very much be a spectator during the entire thing. We felt like she should participate, and watch her and Jamie be more of a team again. It just didn’t feel right for our Claire to stand and watch while this life-or-death struggle was playing out just a few feet in front of her. 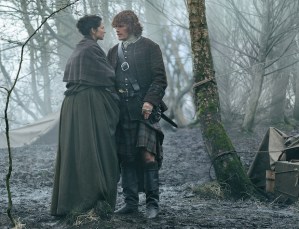 TVLINE | Did you personally have any conversations with Sam and Cait about the goodbye at the stones?
We have talked about it since the beginning of the season. I don’t remember any specific conversations with Sam and Cait other than after the table read, we always have a quick catch up with the cast. We probably talked about it in some fashion, but I don’t recall anything specific. It’s a big moment, and I think what we had to do in TV was condense it a bit. We needed to maintain the urgency of the situation on the battlefield, so we had to keep it tight. We couldn’t stay up there for a very long time because the TV audience would start going, “Doesn’t Jamie have to get back to that battle?” There is a lot of good stuff in the book we had to shorthand to make it narratively work.

TVLINE | Jamie seems a little bit more at peace with the leaving than Claire is. In your mind, is this something he came to a while ago — he knew this was going to happen, and he just got there a little bit quicker, emotionally, than she did?
I agree with that. The character can see the writing on the wall about the war. Clearly, it is not going well. It had been foretold it was going to be a disaster, and he’s watching that disaster play out in front of him. Despite everything he tries, it just looks like this is not going to work. Jamie’s starting to think, “Well then, what happens? And what happens to Claire?” And once he began to realize she was probably pregnant, then he decided, “OK, if she’s pregnant and this is all a loss, here’s what I’m going to do.” He kept that to himself, I think deliberately, so that in the moment he could play that card. He could say, “You’re pregnant. You’ve got to go,” as a way of forcing her to do it, because he knew she would object. He knew that she’s not going to want to leave him, but he knew that he had to have some kind of trump card at the end to get her on the horse and push her through those stones.

TVLINE | Are you thinking the Battle of Culloden will be another production the size of what you did with Prestonpans, or are you going to do something smaller?
We’re talking about all of that now. I’ve written the script, and I don’t want to give too much away about how we’re going to realize it, but it’s certainly something special.

TVLINE | Talk to me about when we see Jamie again in Season 3 and it’s 20 years later. Have you been doing makeup tests? What’s the status of aging Sam?
We have not been doing makeup tests yet; we will at some point. Once you get into Season 3, as you know with the third book, there is a whole story before he ages fully to 20 years. It’s a more gradual process with his story, so we have time to figure out the makeup and all of that.

TVLINE | Hugh Munro survived the episode at the Duke of Sandringham’s estate, though he does not in the books. Are there any other characters you are considering not killing off in the show that die in the books? Or vice versa?
Possibly. [Laughs]

TVLINE | The print shop scene in Voyager is one of the biggest scenes of the entire series. Give me something — anything! — about how it’ll be in the show.
Well, we decided not to do it. Jamie’s going to be a wandering minstrel. He’ll be out on the road, he’s got a whole bunch of women with him. [Laughs] We’ve just decided to go in another direction. You’re going to love it! [Laughs]

TVLINE | I’m sure I’m going to love it.
When he’s out there, playing his flutes, and the kids are sitting around him, and the squirrels, it’s so much better than the print shop. [Laughs]

What did you think of Outlander‘s season finale? Grade the episode via the poll below, then hit the comments to elaborate on your thoughts.