The broadcast networks have nearly 20 shows debuting this fall, including new sitcoms from Kevin James and Matt LeBlanc, the story of MLB’s first female player and Michael Weatherly’s NCIS follow-up. To help you prep for it all, TVLine is offering First Impressions of the not-for-review pilots.

THE SET-UP | Akin to the 2000 Jim Caviezel/Dennis Quaid film, this remake stars List as Raimy Sullivan, a NYPD detective whose father died during an undercover op, when she was 8. Raimy gets to know Frank a bit better when they begin communicating over his old ham radio, despite being separated by precisely 20 years in time.

THE FIRST IMPRESSION | This pilot hits a lot of the same beats as the movie, though the plan appears to be to take the multiple instances of timeline tweaking and protract them across an entire series — which just might work, as father and daughter collaborate to catch a serial killer. (Having caught the movie for the first time over the holiday weekend, I’d argue that the premise does lend itself to additional exploration, though it runs the risk of getting repetitive.) 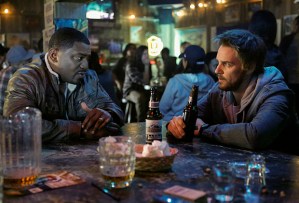 List grounds the supernatural proceedings quite well, especially during the very tricky scenes where Raimy comes to realize exactly who is on the other end of the radio, while Phifer (succeeding Andre Braugher as Satch, a fellow cop) and Kelley (perfectly cast as List’s mom, in the Elizabeth Mitchell role) have the task of playing younger/older versions of their characters (which, frankly, is just denoted by wisps of gray).

Because of the TV series’ updated timelines, it’s a bit wonky that the Sullivans, diehard Mets fans, would mull over minutia about the ’96 World Series ‘tween the Yankees and Braves, but as in the film, the fall classic serves well as a proving ground for Raimy’s “futuristic” claims.

THE TVLINE BOTTOM LINE | Whereas Supernatural weathered this time slot thanks to a loyal fan base built over 11 seasons, Frequency will have a much tougher row to hoe going up against the mighty Empire, those stalwart Criminal Minds, ABC’s solid sitcombo and the seemingly immortal SVU. (Is it odd The CW didn’t go for a “timey wimey” theme night, slotting this for Thursdays after Legends?)

Watch the trailer for The CW’s Frequency, then vote in our poll.