THE EPISODES | “It Sounded Nicer in My Head” and “People Persons”

THE PERFORMANCES | The fourth (and arguably best) season of the Netflix dramedy triumphantly tackled the complex challenges presented by mental illness via the characters of Lolly and Suzanne. Their portrayers, Petty and Aduba, deftly conveyed every conflicted, nuanced emotion as their alter egos remained jailed rather than hospitalized.

Though Lolly was eventually taken to a psych ward (albeit for a murder she didn’t actually commit), her struggle to distinguish between fact and fiction came to head in Episode 7 when Healy found her in a “time machine” she had built out of cardboard and scrap metal. Petty tore at our heartstrings as she held a tight grasp on a potato she thought would help her return to a better time when everything was still possible, and made clear her desire to undo whatever birth defect caused her to be haunted by the voices in her head. This followed an excellent string of flashbacks that let Petty explore what life was like for Lolly prior to her wrongful arrest — a journey that began with her as an aspiring journalist and culminated in her being homeless and selling coffee out of the back of a shopping cart.

Meanwhile, the Aduba-heavy Episode 11 was an absolute gut punch, first by revealing how Suzanne wound up in prison before being forced into a gladiator-style fight opposite Kukudio in present day. To learn that the character was presumably charged with kidnapping and involuntary manslaughter after a series of unfortunate (and inadvertent) events made her situation all the more tragic. As she begged and pleaded to stop being taunted amid every blow she landed on her ex’s face, we, much like Suzanne, were brought to tears. It was an astoundingly raw and real performance from an actress still very much at the top of her game. 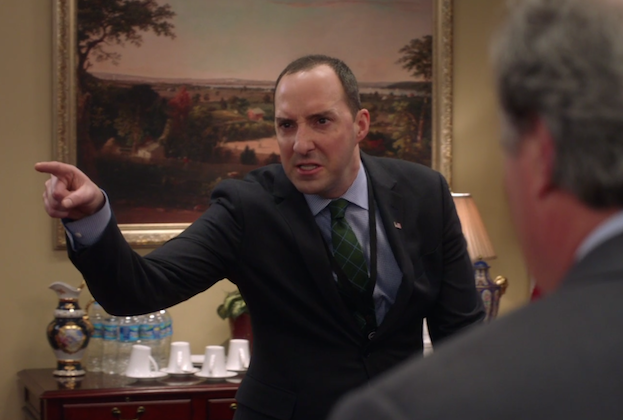 HONORABLE MENTION | We can’t blame Veep‘s Mike for wanting to capture Gary’s election tiebreaker meltdown on video: Because TonyHale is amazing at what he does, the rant was a piece of art. As Selina’s body man lashed out at the rest of the surly, snarky staff for their lack of passion, Hale funneled all of his sadness and anger into a sputtering, shrieking tirade that took down every member of the administration for his or her role in Meyers’ defeat. Hale’s shaky, nervous laughter — one of Gary’s hallmarks — infused the monologue with a slightly off-kilter feel, as though the next accusatory finger-point would tip the bag man off the deep end. It’s rare that the HBO series gives us a peek at Gary’s innermost thoughts; when it does, Hale polishes them into gleaming comedic gold.