Warning: The following recap contains spoilers from Episodes 6 and 7 of Orange Is the New Black Season 4. (ICYMI: Check out our season premiere recap.)

Orange you glad you aren’t currently doing time at Litchfield?

Our sincerest apologies for the pun, but it’s a more than appropriate question to pose as we reach the midway point of Orange Is the New Black Season 4, which has already featured Nicky’s relapse, Sophia’s attempted suicide and Chapman’s brutal “branding” following her inadvertent establishment of the prison’s #WhiteLivesMatter movement. 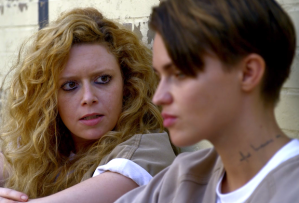 MIGHT AS WELL GET STONED | Nicky tossed her sobriety away faster than Lorna and Vince said “I do.” Not that we’re defending her return to heroin, but she wasn’t given much reason to think clean living was worth a damn. Stuck in Max where she spent her days split between janitorial duties and narcotics anonymous meetings, the inmate was completely alone, save for one conversation with Sophia down in SHU and a one-time hookup with Stella (returning guest star Ruby Rose), who she quickly cut out of her life when she learned she was doped up on skag. She also pushed Luschek away, who finally came to visit her only to clear his conscience.

Nicky finding out that Sophia had attempted to take her own life was enough to push the former junkie back to her drug of choice. After all, her last interaction with Sophia was denying her a blanket after the wrongfully isolated prisoner was put in a cell without a bed. Her return to using was immediately reinforced upon her exit from Max, as she found the fix she needed courtesy of notorious shower pooper Angie. 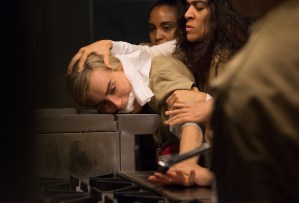 THE ULTIMATE BURN | Chapman did what she had to do to protect her employees once the guards became privy to a used panties business, but were still unaware that there were two operations in play. Little did she know that snitching on Maria would extend her competitor’s sentence by three-to-five years.

Our pragmatic protagonist, who was already feeling like she had lost all of her friends due to her business, was in for an even ruder awakening once Hapakuka turned on her and helped set up the trap for Maria to force down her enemy and burn a swastika into her arm as punishment for all that’s gone bad for her since the formation of the Litchfield Safety Task Force. (Be prepared to wear a lot of long-sleeve shirts upon your eventual release, Pipes!)

MIND GAMES | As Healy would explain to Lolly, his equally paranoid mother lived as though she was trapped inside an episode of The Twilight Zone, “locked in a fake world that no one else was apart of even though it looked exactly the same.” The same can be said for the paranoid inmate, whose time in prison was proven unjust courtesy of heartbreaking flashbacks that showed her regression from promising journalist to unemployable schizophrenic. Though his attachment to the prisoner is clearly unhealthy, their bond has allowed the Powers That Be to explore a case of two people who probably shouldn’t be employed or jailed at Litchfield given their unhinged psyches. (On a related note: How early is too early to start campaigning for Lori Petty to receive an Emmy nomination in 2017?)

THE NOT-SO-PICTURE-PERFECT PLAN |  Caputo’s attempt to have proper enrichment classes for the inmates failed about as hard as Taystee’s attempts to secure a photo of Judy King for Us Weekly. The warden’s assistant teamed with Suzanne, Cindy and Alison in an effort to make some “retirement plan” money, but even after successfully snapping a photo with the perfect focus and resolution, Alison’s contraband phone died and they were left without a way to retrieve the pic. And it’s too bad: Following the leak of Judy’s racist children’s show, there’s no telling how much a tabloid would have paid for a photo that looked like Cindy was reacting to her use of African-American and watermelon (!) puppets.

OK, it’s your turn: How are you feeling at this point in your Season 4 marathon? Is everyone not named Lolly getting exactly what they deserve? Grade the first half of this season in our poll below, then sound off in the comments. (And please keep in mind that for the sake of those who don’t binge at warp speed, discussions should be about Episodes 1-7 only; subsequent recaps will focus on later developments.)