The broadcast networks have nearly 20 shows debuting this fall, including new sitcoms from Kevin James and Matt LeBlanc, Kiefer Sutherland as POTUS and Michael Weatherly’s NCIS follow-up. To help you prep for it all, TVLine is offering First Impressions of the not-for-review pilots.

THE SET-UP | Bunbury stars as Ginny Baker, who after five-plus years in the San Diego Padres’ farm system gets called up to The Show for a spot start. Cheers — and jeers — ensue as MLB history is made.

THE FIRST IMPRESSION | Dan Fogelman (Crazy, Stupid, Love, TV’s Galavant) is on a crusade this fall to make you feel, shepherding this roller coaster of emotions as well as NBC’s This Is Us (previewed here). Ginny’s journey is a complicated one — this isn’t the stadium lights-shattering, goosebump-raising finale of The Natural by any means — and the pilot makes a point to loll in the lows as much as cut to the hurrahs of idolizing little girls in the stands.

Bunbury gets a lot of notes to play, whether arriving at Petco Park with the focus of a laser, putting the butt-slapping team captain in his place (and then fielding the brunt of his valid retort) or working through a breakdown. Larter and Consuelos hint at an amusing rapport, as Ginny’s stone-cold publicist and the Padres’ wannabe-charming GM, while Beach brings a lot of heart to the story as Ginny’s father, a onetime ballplayer 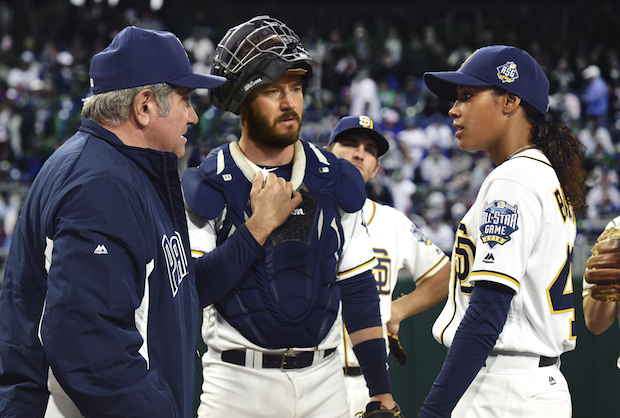 who in unexpected ways pushes her to greatness. Gosselaar, though…. As I tweeted, he dares you to recognize him through a brunette neck beard, a wad of perpetually chewed gum and an engaging mix of swagger and seen-it-all weariness.

On the technical side, the ballpark scenes are spectacular — thanks to a landmark partnership with the MLB, and viewed through the “lens” of (overt) Fox Sports coverage) — but the editing of Ginny’s pitching is cheat-y, often cutting from windup to the “thump!” in the catcher’s mitt. Moving forward, I’ll need more of the continuous, center-field camera POV.

THE TVLINE BOTTOM LINE | Will sports fans be occupied by Thursday football (or actual MLB games)? Is this the sort of family friendly fare that puts a surprising amount of fannies in the seats? Pitch could go so many ways. This much is certain: As one of four (4) dramas in the time slot, and with a soft lead-in that previously benefited from the Empire halo effect, it will need every syllable of its sure-to-be-glowing word of mouth to not get knocked out of the game early.

Watch the trailer for Fox’s Pitch and then vote in our poll.