After shepherding Odin back to the flock last week, Jesse was riding high in Sunday’s Preacher, using his superpower right and left, and frankly being a helluva lot holier-than-thou about it all. For instance, when Emily noted that he didn’t seem like himself, he replied smugly, “It’s not me, it’s God.” But he was heading for a fall — a big one. How so? Read on and find out!

THE COWBOY’S LAMENT | As “South Will Rise Again” began, The Cowboy did his best to ignore the depravity in Ratwater so that he could just get the medicine that he needed for his daughter and get back to her as fast as possible. But a rape scene he’d witnessed there echoed in his head on his way home, forcing him to return to Ratwater. Alas, instead of kick butt, he got his own ass handed to him — and his horse shot to boot. So by the time he made it back to his wife and child, they were both not only dead but being pecked at by birds. In response, he went to his closet and got his rifle. To be continued… (Clearly.)

Meanwhile, in present-day Annville, Eugene — who apparently was somehow responsible for Tracy’s condition — found a rifle left in his room and a message spray-painted on the wall: “Finish the job.” As much as it got to him, it seemed to get to his father more. At one point, Sheriff Root yelled at his boy that he should, in fact, just finish the job. (Da-amn!) Over at Tulip’s uncle’s hovel, the spitfire questioned Cassidy about his vampirism and, when he half-jokingly said that he’d fallen hard for her after their kiss, insisted that she had a boyfriend already. However, since the unnamed beau in question wouldn’t go along with her revenge plot, Cassidy suggested that perhaps her guy wasn’t the man she thought he was.

EUGENE’S SECOND CHANCE | Across town, after Donnie’s wife Betsy forced him to stop calling in sick — since the beatdown Jesse’d given him had made him a laughingstock — the bully was stunned by the “new” Odin who apologized to Miles for not being his “best self” with him, and volunteered to meet with the Green Acre reps. Later, Donnie confessed to Betsy that Jesse had “forced” him to put a gun in his mouth — the same way he suspected the preacher was making Odin serve God. Don’t worry, Mrs. Schenck reassured him. “Sooner or later… he’ll get what he deserves.” At the same time, Jesse was holding court at the local diner when Tulip interrupted to tell everyone what a bad guy he was. Rather than deny it, he admitted his past was as checkered as a picnic blanket. But, he added, frustrating his ex no end, “We don’t have to be what we’ve been.”

Next, Jesse was interrupted by Eugene, who sweetly explained that, because everyone hated him post-mysterious Tracy incident, his father was suffering terribly. Could the preacher help? “We’ll think of something,” he replied. And “something” turned out to be taking Eugene to the Loaches’ home, where Mrs. Loach would have killed the boy, had Jesse not given the order to forgive him. Powerless to resist, she did so — even embracing the kid who, only a second earlier, she’d called a murderer! 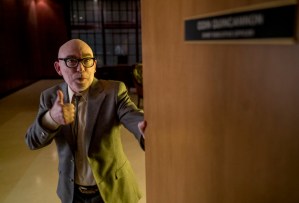 ODIN’S AIM | Determined to prove to Jesse that, in spite of what he thought, not everyone wanted to be good, Tulip knocked over a drugstore and hooked up with Cassidy. (That oughta do it.) At Annville’s motel, Fiore and DeBlanc put off answering’s heaven’s call for so long that the phone stopped ringing. That being an “uh-oh” kind of a development, they finally gave up on Cassidy and approached Jesse directly. After explaining that they were from heaven — yes, the one above (“Is there another?”) — they broke it to the preacher that, “What’s inside of you isn’t God.” What’s more, he wasn’t supposed to use the power it gave him. “And you’ve been using it,” Fiore pointed out, “a lot.” Why shouldn’t Jesse use his superpower? The angels didn’t say just then. But at that moment, Odin was welcoming the Green Acre reps to his office and, to Miles’ horror, fatally shooting them all! Oh dear.

What did you think of the episode? How bad did you feel for poor Eugene? And are we being tricked in feeling sorry for Donnie?!? Hit the comments.