Heaven help him, in this week’s Preacher, our scruffy title hero put his “gift” to its greatest test yet by trying to return Odin to church — permanently. And, regardless of Jesse’s superpower, I would have said prior to watching the episode that there was about as much of a chance of that happening as there was of Tulip kissing Cassidy. So was I wrong… or was I wrong twice? Read on and find out!

A ‘FALLEN’ WOMAN | Early on in “Monster Swamp,” a paintball game between the Quinncannon Meat & Power guys and Mosie’s unarmed and mostly undressed prostitutes ended with Lacey falling to her death in a sinkhole. As she was “retrieved” by Sheriff Root the following morning, Odin addressed both his crew and the hookers, “sensitively” urging the girls to watch where they’re going in the future.

Meanwhile, Cassidy’s attempt to explain to Jesse that a pair of angels was after the entity within him only made the preacher think that his pal was high. Which, after striking a lucrative bargain with the gullible duo, he was. Unfortunately, the blood-sucker chose to celebrate at Mosie’s whorehouse, where Clive’s callous reaction to Lacey’s demise so enraged Tulip that she threw him out a window.

Well, she threw someone out a window. Too late, she realized that she’d mistakenly barged into the wrong room and attacked a total stranger — Cassidy!

As Tulip rushed to the E.R. with the vampire, he asked her to kiss him, which — since she was the reason he had shards of glass protruding from his neck and all — she did. After Cassidy went M.I.A. at the hospital, Tulip was shocked to find him enjoying Happy Hour at the blood fridge. “You were right, love,” he cracked. “I think I’m gonna make it.”

PREDATOR AND PRAY | Paying a visit to Emily, Jesse expressed an eagerness to see the church full to capacity every week. How could they make that happen? “Patience and hard work,” she replied. Nah, he couldn’t wait that long. Instead, he suggested they raffle off a TV that the church could in no way, shape or form afford. When she fretted that he was up to his old tricks, he came thisclose to kissing her as she reassured him that all he was going to do was “somethin’ wonderful.”

Later, after Miles suggested that Odin consider teaming up with the Green Acre Group — and Quinncannon responded by whipping out his johnson and pissing on the brochures — the mayor convinced crush Emily to have a glass of wine and a laugh with him. “I’m never gonna be with you,” she reminded him. “You know that, right?” Sadly, he did. But, as long as he did, she was still willing to have sex with him (and apparently not for the first time!). 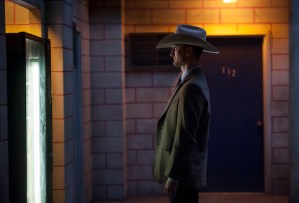 Back at the Annville Hotel, when not praying that Cassidy would honor their agreement and deliver Jesse to them, DeBlanc and Fiore debated alerting “them” to what was going on. In the end, DeBlanc settled the matter by pointing out that “they” didn’t even know that the duo had come down to earth without permission, much less the reason that they had. (Of course, as the hour drew to a close, their Batphone to heaven rang. Ruh-roh.)

A DEAL WITH THE DEVIL | Dropping in on Odin, Jesse asked him to attend church that Sunday. If folks saw “a leader of the community” doing so, they’d all follow suit, he reckoned. Since Quinncannon couldn’t have been less interested, Jesse promised that, if he came to All Saints’ and wasn’t turned back into a Christian by the sermon, he could have the Custer lands that he’d always coveted.

Come Sunday, Jesse’s sermon started dark, with the preacher telling his congregation that “the world is turning to s—, and you know what? It’s all your fault” — for losing faith. But they were lucky, he continued. Because he was going to restore their faith, one by one, starting with Odin, the sinner who’d strayed the furthest. “Will you serve God?” he asked Quinncannon. “Nope,” Odin replied. Again and again, Jesse asked the question, and again and again, he got the same answer. Finally, he told rather than asked Odin to serve God, and bam! That did the trick!

So, what did you think of the episode? I still think the show is wonderfully weird, but do you agree that the pace has slowed to kind of a crawl? Hit the comments.