Warning: This recap contains spoilers from Episodes 12 and 13 of Orange Is the New Black Season 4. (Behind? Peruse our season premiere and midseason recaps.)

As Orange Is the New Black‘s fourth season drew to a close, one inmate was dead (R.I.P., Poussey), another was armed, and the rest of the jailbirds were riled up.

Though the ladies that fill Litchfield’s bunks are the only convicted criminals in the big house, it was the officers who created the most havoc this season. MCC’s decision to hire veterans to guard the prison royally backfired, and it’s safe to assume that at least one or two of them are suffering from PTSD.

So, needless to say, the specific issues that plague the current crop of correctional officers were of little concern come the end of Episode 13: Each and every inmate stood in solidarity with Daya as she pointed Humphrey’s own gun at his head.

A MOVEMENT AFOOT | After Humphrey’s staged gladiator fight between Suzanne and Kukudio, the white supremacists approached Taystee and Poussey about taking him down by any means necessary. Taystee agreed to partner up, but convincing the Spanish Harlem clique to join their cause took more negotiation than expected. First, Maria didn’t want to go after Humphrey but rather his superior, Piscatella. Second, she wanted to lead the movement, which quickly included Hapakuka and Red among its ranks. The rest of the black girls clique (except for Poussey) eventually agreed to partake in any hypothetical takedown after seeing how Humphrey’s actions had messed with Suzanne’s head. What eventually culminated was a peaceful protest that ended in tragedy. 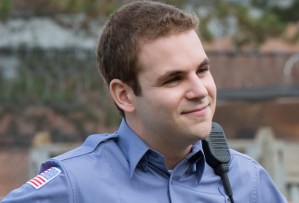 ‘LIFE IS PAINFUL. SUFFERING IS A CHOICE.’ | As a movement was brewing, Bayley was busy proving that not all millennials are the worst. Unfortunately, approaching Caputo about Humphrey proved little to no help. Not only did Piscatella reject Caputo’s decision to suspend the psychotic officer, he threatened a walkout if the warden attempted to suspend any of his employees again.

Realizing Bayley still had his entire life ahead of him, Caputo tried to convince the young officer to quit and leave Litchfield behind forever: “Working here changes who you are,” he said. “This place crushes anything that’s good. It’s like a monster that has grown too big for its stubby little legs, and now it’s stumbling around crushing whole cities.” Though the metaphor prompted Bayley to mull over whether working at the prison was right for him, he hadn’t made any decisions about what he’d ultimately do before he found himself in the middle of the inmates’ protest.

After the ladies all took to standing on the cafeteria tables in protest of Piscatella for his inhumane treatment of Red and other prisoners, the commanding officer ordered his crew to forcibly remove them. When Bayley was then instructed to restrain Suzanne as she was in the midst of a panic attack, Poussey stepped in to help her friend and was in turn pinned down. As the untrained officer kept all of his weight on her back, she eventually lost the ability to breathe and quietly died in front of everyone.

LET’S START A RIOT | Though MCC was ready to let Bayley take the fall for Poussey’s death, Caputo had had enough. When scheduled by the corporation to “expose” Bayley as having had intent during a press conference, the warden went off script and spoke the truth: His officer wasn’t given the proper training and never meant to take the life of a prisoner, who for the entirety of his dialogue went unnamed. Caputo also insisted that Bayley would be welcomed back to work following a temporary suspension, which turned out to be the fuel Taystee and her fellow inmates needed to band together and riot in the halls. When the prisoners were eventually stopped by Humphrey, that’s when things got ugly. The officer pulled out an unauthorized gun, which was quickly knocked out of his hands by Maritza and picked up by Daya. As the finale came to an end, Aleida’s daughter pointed the weapon at Humphrey’s head as her fellow prisoners cheered for her to shoot the corrupt guard between the eyes.

As for what else was going on at the prison, here’s what you absolutely must know:

* Healy turned Lolly in for the murder of Kubra’s hitman. In other words, Alex no longer had to worry about getting caught.

* Sophia’s alive! The inmate was released from SHU and put back in minimum security after Danny and Crystal confronted Pearson Sr. about the inhumane way she was being jailed.

* Pennsatucky forgave Coates but quickly learned not to act on impulse after a kiss prompted the officer to speak about the violent way he’d like to have sex with her again. 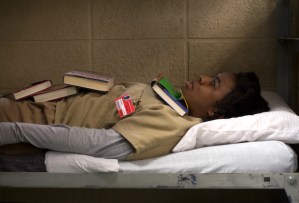 * Struggling to cope with her feelings regarding her fight with Kukudio and Poussey’s death, Suzanne tried to see what it would feel like not to breathe and managed to have rows upon rows of library shelves fall upon her chest. Her injuries did not appear life-threatening.

* Lorna’s paranoia — having prompted her to accuse Vince of cheating with his sister-in-law — has likely destroyed her marriage.

* Judy King was granted early release so MCC could avoid an additional PR nightmare following what went down with Poussey. Unfortunately for the polyamorous Martha Stewart/Paula Deen hybrid, her exit from Litchfield was interrupted by the riot that capped Episode 13.

Have at it, OITNB fans: How are you feeling at the end of your Season 4 binge? Since you’ve already had a chance to vote on Episodes 1-7, grade Episodes 8-13 below, then sound off in the comments.