Although neither Penny Dreadful creator John Logan nor Showtime could imagine the heartrending drama continuing without leading lady Eva Green and her haunted alter ego Vanessa Ives, your friends at TVLine — and many of the series’ fans — could, can and do. We even know how we’d do it.

First, we’d bring Mr. Lyle back from Cairo with plans to stage a lavish exhibition of artifacts related to Amunet, the goddess who once possessed Miss Ives (thus setting the stage for Green to guest-star, should she so desire, as the deity’s embodiment!). But, of course, the Egyptologist wouldn’t merely return with hieroglyphics and sarcophagi, he’d return with a cursed mummy in tow!

Upon realizing the grievousness of his mistake, Mr. Lyle naturally would call upon his old friends Sir Malcolm and Ethan, who by then would be vying for the affections of Catriona. (You saw for yourself — they both immediately set off sparks with Ferdinand’s gal pal!) On the sidelines, Dr. Seward would just shake her head and laugh, knowing full well that a rascal like Sir Malcolm needs a woman as formidable as herself to keep him in line. If only the fellows had an inkling that the reason Catriona was plagued by nightmares was that Dracula planned to turn her as payback for Vanessa’s demise! 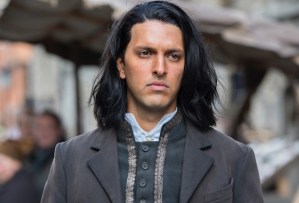 Meanwhile, unbeknownst to Victor, Lily would reacquaint herself with her onetime captor Henry — sorry, Lord Hyde — in hopes of using his new position in society to accomplish at least some of the goals of her thwarted revolution. Just as she began to have real feelings for her lover of convenience, she’d discover that his out-of-control rage had turned him into the monster who was laying waste to the streetwalkers she was so eager to protect, and turn to, of all people, Victor to intervene (lest she be forced to kill Henry).

Along the way, perhaps we could address the fact that Victor murdered, then reanimated Ethan’s girlfriend Brona — and slept with her — and never mentioned it to his buddy, the werewolf. Maybe Mr. Lyle could commiserate with the Creature about their status as perennial outcasts — or Ethan could make Mr. Lyle feel less alone by revealing that, once upon a time, he enjoyed a tryst with Dorian Gray. The possibilities are endless, really!

What do you think? Would you want a fourth season of Penny Dreadful even if Green wouldn’t be playing Vanessa? What monster(s) would you introduce? Hit the comments!