Although Mother, May I Sleep With Danger? was billed as a 20th-anniversary remake of the Tori Spelling camp-classic TV movie, all James Franco’s Lifetime version really had in common with the original was the title, Spelling’s, um, acting, co-star Ivan Sergei and a heaping helping of cheese. Gone was 1996’s obsessed boyfriend, and in his place was a softhearted lesbian vampire. Was it a change for the better? Did the redo “suck”? You already know I thought it was hilarious. So let’s go over the nonsensical plot, then you can take a turn grading it and offering your own critique in the comments. 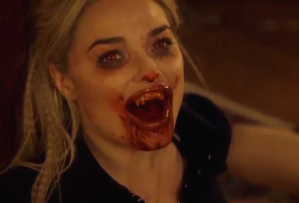 ‘I’M A NIGHTWALKER’ | In the thriller’s dramatic prologue, teenage shutterbug Pearl (The Leftovers’ Emily Meade) mortally wounded her vampire girlfriend after being bitten against her will. Now, the dying blood-sucker explained, Pearl would thirst forever until she found and turned her one true love. (Because, apparently, when two vampires are, like, super-mega-really into each other, they no longer have to drain strangers, they can just feed off of each other.) Within seconds — wow, that didn’t take long! — Pearl was struck by terrible hunger pangs. Luckily, her late ex’s perpetually grumpy gal pals happened to be in the neighborhood with a Manwich.

Fast-forward five years, and college co-ed Leah (Leila George) was impressing her professor (Sergei) with her analysis of Twilight and preparing to try out for the role of Lady Macbeth in the school play — or so her smitten classmate Bob (Nick Eversman) thought. When it was Leah’s turn to audition, she surprised her fellow thespian by going up for the same part that he had — Macbeth — and won over the director (Franco) by reading with a sexy vamp as her scene partner. As if Bob wasn’t feeling low enough — he was cast as the second-tier Mac, Macduff — he later spotted his crush kissing her secret girlfriend, Pearl, who in her free time was being pressured by the vamps to hurry up and turn Leah. (Why they were in such a rush was, like their constant sourness or aversion to pastels, never explained.) 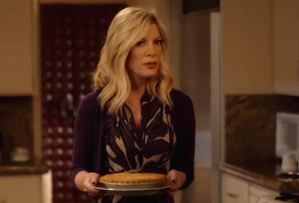 ‘I DID NOT DIRECT THAT’ | When Leah made the brave decision to invite Pearl to dinner with her mother Julie (Spelling, having “graduated” from the ingénue-in-distress role), it was a disaster — and not only because Mom was such an inept cook that she neglected to turn on the oven. The revelation that Leah was a lesbian proved, hilariously, to be “too much for [Julie] to handle.” The next day, following a softcore-porn-y Macbeth rehearsal, Bob started acting a little Brock Turner-ish toward Leah, and spotted Pearl locking lips with one of the cranky vamps. Sensing an opportunity to bust up the girls, he phoned Julie to warn that Leah was falling in with a “bad crowd” that had to be into “drugs or something.”

Off that wholly reliable and not-at-all-questionable tip, Mom confronted Leah about “this whole new world of trouble” she was entering. Then, unsatisfied by the argument’s resolution, Julie rang up a college professor to fake-inquire about buying some of Pearl’s photos. Somehow, (a) this professor was fine with taking a rando mother’s call after hours, and (b) knew so much about the entire university that he could state authoritatively — off the top of his head — that Pearl was not a student there. So, while the Sisters Grimm chowed down on a frat-party rapist, Julie snuck into Pearl’s photo studio and looked extra shocked to discover some “vamp”-y photos lying around. 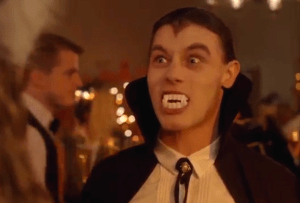 ‘YOU’RE JUST SAD… BITCH’ | Since Leah refused to stop seeing Pearl even if Julie quit paying her daughter’s tuition, Mom was (obviously!) left with no choice but to hide behind trees and spy on their dates. When Pearl finally confessed to her girlfriend that she was a nightwalker, Leah freaked… for about a day. Then she decided, “You can’t help who you are, right?” She even volunteered to be turned so that Pearl wouldn’t have to kill anymore. Just then, the mean vamps arrived, and Leah was forced to make a run for it. The next day, at the big country club Halloween party, Bob (in Dracula drag) slipped Leah a roofie and would have raped her, had the vamps not attacked him.

At Macbeth’s opening night the following evening — yes, things were suddenly moving very quickly! — Leah was surprised to see Bob, who’d been M.I.A. since he sexually assaulted her. She was even more surprised when he broke character during a scene, revealed that he’d been turned and attacked her for real. After a little swordfight, Leah fled, with Bob and the vamps (who were playing Macbeth’s witches) giving chase, leaving no one on stage. “Thanks for coming, everyone,” said the director. “That’s Macbeth.” Next, during the climactic graveyard showdown, Bob tackled Julie, Pearl tore apart her frenemy vamps, and ultimately, Leah bashed Bob’s head in. Unfortunately, she was too late to save the mother who’d so valiantly tried to tell her, “No, you may not sleep with danger!” 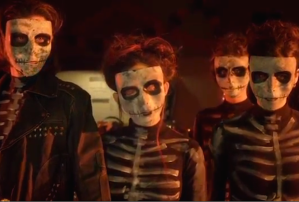 LIVE AND TURN | Finally, Pearl relented and granted Leah’s request to turn her (which was accompanied by the kind of screaming that we’re trained to expect from childbirth scenes). A year later, we returned to the annual Halloween party and discovered that Bob and the vamps weren’t dead, even though Pearl had literally ripped an organ out of one of them during their big faceoff. Which begs the question: If vamps are actually indestructible, how did Pearl kill her original girlfriend just by sticking her in the neck with a piece of broken glass? For that matter, why did Bob heal completely, whereas the vamp whose eyes Pearl gouged out… remained blinded? And hey, if the vamps were all in the cast of Macbeth, does that mean the director never held a rehearsal during the day?

Really, it doesn’t matter, does it? This wasn’t the kind of flick that was supposed to make sense. But did you get a kick out of it? Vote in the poll below, then review away in the comments.