Before you go saying, “OMG, TVLine hates everything lately!” that grade of “F” is for “fun.” If you liked NBC’s original, so-bad-it’s-awesome Mother, May I Sleep With Danger? odds are, you’re gonna love James Franco’s 20th-anniversary remake for Lifetime (premiering June 18 at 8/7c).

Masterpiece, it’s not. It’s more of a… a… trashterpiece. And it bears little, if any, resemblance to the 1996 cult classic, in which Tori Spelling’s mother tries to save her from obsessive boyfriend Ivan Sergei. But the redo — in which Spelling plays the mom of a co-ed who’s fallen for a (gasp!) lesbian (double gasp!) vampire — is still solidly silly and spectacularly cheesy.

The wafer-thin plot: Five years after being turned against her will by her ill-fated blood-sucker girlfriend, shutterbug Pearl (The Leftovers alumna Emily Meade) has fallen for college thespian Leah (Leila George), and vice versa, which is terribly upsetting to both the latter’s smitten fellow drama major Bob (Nick Eversman, late of Missing) and her snoopy mom Julie — and this is before they even know that Pearl’s a “nightwalker”!

Though if the vamp turns her “one true love,” they’ll have an “eternal bond,” meaning they can feed off each other rather than kill to survive, she’s reluctant to do so. For one thing, she rightly imagines that Leah will freak when she learns she’s dating a blood-sucker, not a night owl. For another, Pearl is being pressured to put the bite on Leah by a trio of fellow nightwalkers who seem to always be pissed off (as well as dressed like they’re hoping to be cast in a remake of The Craft). 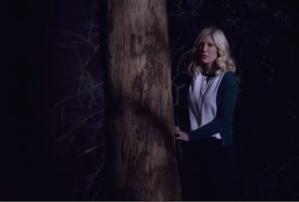 Before the closing credits roll, executive producers Franco, who also plays the college professor directing Leah in (and as) Macbeth, and Spelling give us umpteen photo-shoot montages, Danger vet Sergei as a professor whose course should be named Metaphors Conveniently Relevant to This TV Movie and a fantastically funny scene in which Julie spies on her daughter by hiding behind a tree like she’s a cartoon character (pictured). If you don’t take Danger 2.0 too seriously — and honestly, how could you? Why would you? — it’s just a goofy good time.

The TVLine Bottom Line: If you read this review, admit it — you were already planning to watch. And now that you know Danger’s cheesestastic, you’re really looking forward to it!