Since The Walking Dead’s Season 6 finale left us with the most polarizing cliffhanger in recent memory, we’ve seen fans of the AMC hit use everything from geometry to isolated audio clips in hopes of deducing which character Negan fatally “beat the holy hell out of.” But, in thinking and rethinking over the climactic scene, we’ve realized that the top Savior might actually have identified his victim himself before he’d even started swinging. Consider:

Only five characters made any kind of an impression on Negan: Rick, the leader of the “pricks”; Carl, “the little future serial killer”; Maggie, whom the villain noted looked “s—ty”; Glenn, who freaked when it appeared that his pregnant wife was being chosen for batting practice; and Abraham, who all but volunteered for “the honor” of being sacrificed to Lucille. (Negan’s enigmatic response: “Huh.”)

We know that Rick and Carl are safe, because Negan promised to have the boy’s remaining eye cut out and fed to his father if anyone dared to intervene. And, keeping in mind the relatively small number of women that the slugger offs in Robert Kirkman’s graphic novels — and the fact that, in the comic book series, the sociopath is also, surprisingly, anti-rape — it doesn’t seem likely that he’d actually go through with his threat to “put [Maggie] out of [her] misery right now.” 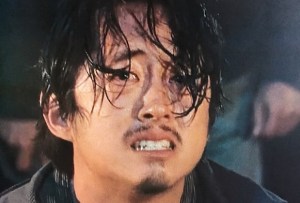 That just leaves Glenn, who by this point we all know gets struck out in this issue of the comic books, and Abraham, who, in the graphic novels, is by then deceased. (In the small screen version of events, Dwight shot Denise in the eye with an arrow instead of the soldier.) And, since only one of the men qualifies for the “very beloved to everyone” tag that Kirkman affixed to the victim — no offense, Abraham — it would appear that Glenn won’t be able to cheat death for a second time.

Negan was faking out his potential victims — and us along with them — by all but ignoring the individual that he was about to choose. Certainly, it’s not out of the realm of possibility: He is both a showman and a smart S.O.B., after all. 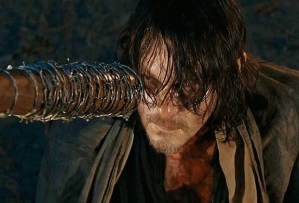 If that’s the case, “the very best one” that the villain selected could turn out to be — gasp! — Daryl. Having blown up Bud and his team of Saviors, and gone head-to-head with Dwight, the biker was certainly on Negan’s radar. And. given the lengths to which the show went to make us believe that Glenn had kicked the bucket in “Thank You,” would anyone really be surprised if the powers that be were again trying to mislead us by letting Norman Reedus do interviews teasing Season 7?

What do you think, armchair analysts? Are you betting that it was Glenn who was “takin’ it like a champ” in the sixth season finale? Daryl? Or someone else entirely? Hit the comments.