Jaime and Brienne’s reunion in Sunday’s Game of Thrones may not have taken place in a steaming bath, but star Nikolaj Coster-Waldau says that doesn’t mean there wasn’t plenty going on under the surface.

The characters hadn’t seen each other since the fourth episode of Season 4, when the Kingslayer gave the lady knight his sword, Oathkeeper, as she set off to find Sansa Stark. Prior to that, they’d survived capture by Bolton forces, near-rape, the loss of a hand, near-mauling by a bear and, of course, the aforementioned Bath of Confession. So yeah, there were feelings aplenty between the two — even though, as the actor points out, “Clearly it’s something they can’t act on.”

We wanted to hear what else Coster-Waldau had to say about such a momentous scene — and how it’s all likely to bite Cersei’s twin in the behind when his final Lannister debt is paid. Read on to hear the actor’s thoughts on “No One” and the final two episodes of Season 6.

TVLINE | I was just so happy to have Jaime and Brienne in the same room in this week’s episode.
Well, so was I!

TVLINE | What were your thoughts when you found out the interaction was on its way?
I was excited that finally they would meet. In the books, of course now we’re off book, but the last thing that’s still a part of the original books is this meeting between the two. But it’s quite different than in the book, because there’s a whole different storyline that’s not in the show. So when I read the script, I was excited. I thought it was a great scene. And I was excited to get to work with Gwendoline Christie again. We’ve had a lot of fun over the years.

TVLINE | We’ve talked before about how Jaime might’ve had feelings for Brienne — high esteem, respect, perhaps affection — but he hasn’t been able to put them into words. He’s acted on them, certainly, but this scene is the first time they’ve actually talked about some of them. Is this the most comfortable they can be talking about their friendship, given who they are?
[Laughs] Well, I hope that they could get a little further. But it’s less to do about their relationship, more about their own personal journey as human beings. Everything they do, they’re following someone else’s agenda all the time — by choice. The whole thing of being honorable, being trustworthy when it comes to the people they love or the people they’ve promised to protect, they’re each other’s equal that way. Jaime will do anything for Cersei. He believes it’s his duty but it’s also his choice, if you will. Brienne is now Sansa’s… whatever you call that. Kingsuard? I know there’s a word for it.

…In a weird way, someone else’s agenda or feelings always come before [Brienne and Jaime’s] own. I’m not even sure that they would ever allow themselves to go to that place. There’s no question you see that in this scene: There is more between them. But the way the scene ends, when she says, “If this goes back, I’m going to have to fight for Sansa Stark, and I’m going to have to fight you.” And he says, “Well I hope it doesn’t come to that.” There’s no question that if it comes to that, they’ll both do it. And obviously she’s going to kill him in an instant.

TVLINE | It occurs to me that now she could do it with his sword.
Don’t say that out loud! [Laughs] I’m sure the writers already planned that years ago. This was his moment. Just take the sword back! I was like, “Just take it. Take it! You know it’s going to come back and haunt you.” But you’re right. 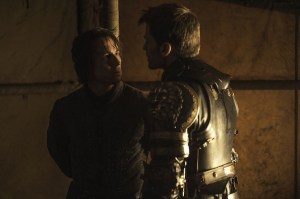 TVLINE | The scene with Tobias Menzies as Edmure: Jaime handles threatening his prisoner in a way that’s much different than he would have a few seasons back. Less brash, more mature and, for lack of a better word, thoughtful?
He’s matured in a way. He was a soldier when he had his hand, and he enjoyed fighting. But I’ve never seen him as someone who particularly loved killing and the mayhem. He’s seen enough of that in his life. He wants to avoid that whole thing. He tried to talk sense to The Blackfish in the episode before when he says, “You’re going to sacrifice all your men for what? There is only one ending to this. It might take a year, it might take a day, but this is it.” He’s also, in a way, understanding himself better. How do I find a way into this guy? He had this briefest of moments with Myrcella when he realized how dear it is to have a child, to be a father, and what that means. And knowing that even though Edmure has never seen his kid, most people would do anything to save their children — thank God — so he uses that. He does it in almost a matter-of-fact manner, which is why I think it works so well, because there is no question that he means what he says. He will do anything.

Of course, they set it up. The writers were very clever. When he arrives at Riverrun, he has the scene with the Frey brothers when he tells them, “Listen, if you’re going to make a threat, you’ve got to be prepared to carry through.” This is the payoff to that little scene when he says that this is how it is. He’s done that consistently throughout most of the series. When he says horrible things, and hurtful things, they usually spring out of a truth… It might be like Catelyn Stark has this relation to Ned Stark, this beautiful, perfect family… You have this amazing husband and he’s honorable, and I’m clearly the dishonorable guy. But the fact is, your husband brought home a bastard. [Laughs] He clearly f–ked someone else. That’s a horrible thing to be told, of course. And she gets really upset and hits him in the head with a rock. But it’s still the truth. And it hurts.

TVLINE | We see Bronn and Pod having a conversation outside the tent.
Which is such a great… it feeds the subtext of the scene we’re about to see, because clearly there is something going on between Jaime and Brienne, and clearly it’s something they can’t act on. Maybe in a very secret moment. But they would never verbalize it.

TVLINE | On that tip, I loved that Jaime looks around to see if anyone is watching before waving to Brienne as she rows away.
Oh, yeah.

TVLINE | Also in that Pod-Bronn talk, there’s discussion of different styles of fighting: the more formal, militarized way — like Jaime and Brienne know — and the down-and-dirty way at which Bronn excels. Given that we know there’s a huge threat coming down from the north, and that the white walkers don’t fight fair, how do you think characters like Jaime and Brienne will fare in the war to come?
It’s smart to hold onto that sword, because it’s Valyrian steel. [Laughs] That has special abilities. It was kind of a similar scene to when Bronn was training Jaime two seasons ago, and he was doing the same thing about breaking the so-called rules of the game. The thing about waiting for someone to be ready to fight? No, no. You just fight. It’s about winning… You need a lot of fire to beat those things. So let’s hope the dragon lady makes it across the pond. [Laughs]

TVLINE | Last question: Give me any tease you can about the next two episodes.
I think the next episode is the biggest they’ve made, in terms of scale. Production-wise. A lot of stunt guys were working on that episode. And the last episode, it’s just, it’s… no I can’t give you anything. [Laughs] It’s a cool ending to Season 6.