In the premiere of TNT’s Animal Kingdom, impressionable young J Cody was always being given things by his thieving uncles. Money. Jewelry. The false impression that breakfast is clothing-optional and petty disagreements are best settled with firearms. So the question became, would the teenager be seduced by his family’s flashy criminal lifestyle? For that matter, would we be seduced by the series? I wasn’t. How about you? Read on, and after we go over the major developments in the series’ opener, you can grade it and weigh in with your review in the comments sections.

‘MY CUPCAKES ARE RUINED!’ | After J’s mother Julia died of an overdose, he phoned her estranged mother Smurf (Ellen Barkin). It was awkward at first. “J who?” she asked. And it would only get more awkward once she’d moved him not just into the lavish home that she shared now and then with her sons/henchmen, Craig (Ben Robson) and Deran (Jake Weary), but into the room of her eldest, Pope, who was away serving a six-year sentence for bank robbery. While Smurf took a stab at being grandmotherly by baking cupcakes, her golden boy, Baz (Scott Speedman), offered the grieving kid booze instead. (And Baz was our voice of reason!) As for Craig and Deran, they alternated between throwing cash at J so he could buy some sneakers that didn’t offend them and questioning the wisdom of taking the boy in right before a job. After all, as Craig noted, it wasn’t like they could “take him to IHOP and ask him if he’s gonna screw us!” 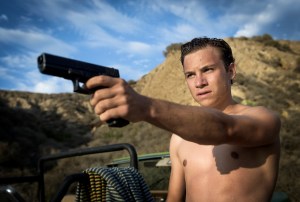 ‘FOR A BAD INFLUENCE, YOU’RE NOT PULLING YOUR WEIGHT’ | Attempting to follow Mom’s orders and suss J out, Craig and Deran took him surfing. Which, for them, meant antagonizing the other surfers, cutting their rack straps and, when confronted, giving J a gun with which to scare them off. “Ya got a little stiffy?” Craig asked his nephew afterward. Later, at a Cody barbecue, Smurf obviously disapproved when Baz’s girlfriend Catherine (Daniella Alonso) wouldn’t let him jump off the roof into the pool like the other idiots. It didn’t look like J was going to jump, either, so Craig grabbed him and suddenly leapt off with him. When J went to dry off, he was surprised to find Pope (Shawn Hatosy) in his room — well, in Pope’s own room, technically. Tension mounted as the parolee asked the newb if he was “part of it all now,” so as soon as he could, J bicycled to girlfriend Nicky’s house and cut short her seduction by confiding that his mom had O.D.’d.

‘WOULD ANYONE ELSE LIKE TO SAY ANYTHING?’ | Eager as Pope was to get going on the next heist, Smurf said that he’d have to sit this one out. Oh, and he also couldn’t crash in his room. “We can’t have parole officers popping in,” she pointed out. One other thing: He also couldn’t go back to his old place — Baz sold it. (Welcome home!) At the same time, Craig and Deran got to work on the next job by abducting a bunch of tweakers and locking them in a van. (Why, we wouldn’t find out until later.) On the day of Julia’s funeral, Smurf put on a blouse she’d swiped from her daughter’s place, thrust out her breasts and asked J how she looked. (Clearly, she’s an Oedipus Rex fan.) At the service, Julia’s neighbor made a (small) scene, suggesting that J shouldn’t be with the Codys, that his mom had done all she could to protect him from them. Later, Pope pleaded with Baz to let him help with the new job. Though Baz wouldn’t defy Smurf, he did give his pal a task: Get them a car. 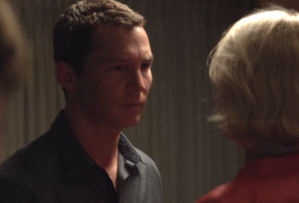 ‘HEY, MAN, DON’T TRAMPLE ON HER FREEDOM’ | That evening, Baz tried to no avail to stop Craig from snorting coke in front of J and Nicky. In response, Craig offered some to the kids, who declined. After the youngsters passed out, Pope… well, he just stared at Nicky at first. Then, he carried her to bed and stared some more. Thankfully, at that point, J interrupted. “She’s beautiful, man,” said Pope, radiating creepiness. Later, he burst in on J in the shower — between Smurf’s peepshow tops, Craig’s breakfast au naturel and this, none of the Codys seemed to have any boundaries — to take him out to steal a car. Before the mission was complete, J had gotten beat up a little, the car’s owner had gotten beat up a lot, and the teen looked like he’d quite understandably crapped his pants. Back at Smurf Village, when Grandma hit the roof over Pope using J without her OK, he reminded her of what sounded like a pseudo-incestuous game they used to play (maybe not even “pseudo”?) and, when the teen defended her, put him in a headlock. (Christmas with this lot must be somethin’.)

‘GIRLS LIKE SHINY STUFF’ | Off that scene, J ran away to his mom’s apartment and tried futilely to get in touch with his long-gone dad. Leaving, he was for the second time confronted by his mom’s old dealer for the $90 she owed him. This go-round, however, J was so at his wit’s end that he disarmed the creep and turned the tables on him. Meanwhile, the Cody gang released the tweakers, who had done their “job” by pissing their DNA all over the van (so much the better to confuse the cops post-heist). Then, the thieves crashed the van into a jewelry store, took everything in sight and were making their getaway in a different vehicle when… oops. Security guards that Deran hadn’t expected to be there blocked their escape. By the time the Codys made it back to Smurf’s, one security guard had been driven into the side of a dumpster, Craig had been (non-fatally) shot, and Deran was in desperate need of his mama’s babying. So that was the insane scene to which J returned. As if to square things between them, Pope gave his nephew a shiny new watch that he could offer Nicky as a present. Yep, this was the world in which the poor kid was now stuck. 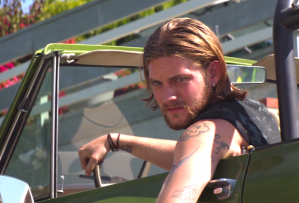 ‘WE’RE NOT GREEDY’ | In Episode No. 2, the Cody sibs continued to take turns menacing J, Smurf made him promise to keep their secrets, then watched a lot too intently as he followed her instructions and stripped out of his smelly clothes, and he caught Deran getting a bathroom-stall BJ from a guy at the beach. Upon learning that the security guard who’d been injured had died — and was a cop! — Smurf ordered the stolen watches and getaway vehicle destroyed. But, rather than obey Mom, Deran and Craig merely torched the vehicle (and contemplated pulling their own jobs). Later, Smurf swiped medication in hopes of keeping Pope’s crazy in check, he pushed Catherine to admit that their one-time hook-up years ago had meant something to her, and Craig’s condition worsened so much that he had to be rushed to un médico in Mexico, where — surprise — Baz had a spare girlfriend.

So, what did you think of the premiere? Are you wild for Animal Kingdom? Grade it in the poll below, then hit the comments with your thoughts.