Coming off its supersized Season 4, TNT’s Major Crimes has a lot of things planned for its relatively quaint, 13-episode Season 5 (premiering tonight at 10/9c), keeping Sharon and the team busy on both the professional and personal front.

Who is out to heat up a cold case? Who’s house-hunting? How will ISIS trigger a turf war between the FBI and LAPD? Who has baby on the brain?

Series creator James Duff gave TVLine an overview of what’s to come, starting with our 11th annual (dating back to The Closer) asking of….

TVLINE | Yeah. It seems as if everybody’s got something going on, on the personal front — perhaps more than ever.
Yeah, more than ever. Being an ensemble show, I like to do it where a different character pops up with their own lens through which they’re viewing the crime, and we’re doing more of that than ever.

TVLINE | You’ve got kids, “maybe” kids, house hunting, solving a family death….
Yes, everything. Sanchez is trying to figure out whether he wants to date or do something more meaningful with his life than just work. And he’s having trouble dating, obviously.

TVLINE | So might he look to “cut out the middleman” and adopt?
I think he may. He wanted to be a father really badly, and he sort of explored that, so he’s looking at different ways he might be able to implement that fantasy in a way. He wants to make it real, 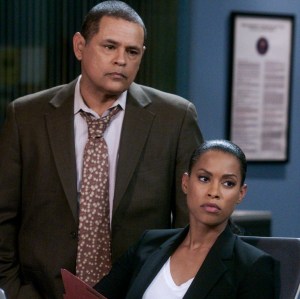 which I think is an urge a lot of guys feel — the desire to be a father.

TVLINE | Which character would you say has the most on their plate in Season 5?
I would say the character with the most on their plate is actually Buzz, because — and we’ve established this in previous seasons — his father and his uncle were murdered, and he’s gone to great lengths to get the files on that case. That’s the story that plays out through the season, and everybody gets involved in it. I would also say that, as the season progresses, Sharon ends up having a great deal on her plate in terms of where the eventual power lies inside the department. I can’t say more than that on that issue, but she does end up with sort of a big problem.

TVLINE | Give me a taste of some of the wilder cases you have on tap this season. There’s one involving ISIS…?
Well, yes. There is a beheading and it turns out to be in the “American homeland,” as the terrorist describes it, and the FBI (led by Annie Wersching’s Special Agent Soto) is trying to look for him without alerting everybody to where he might be. It ends up being kind of a turf war with Sharon for various reasons. We also have an episode dealing with a real estate agent who gets found floating in the swimming pool of the house Flynn is trying to buy.

TVLINE | Oh, God….
Yeah, he’s showing it to Provenza, and he has Buzz along to film it because he wants to show Sharon this house and she’s too busy. And he says, “There’s just one deal breaker. See if you can spot it,” and they find a dead Realtor in the pool. And then there’s a guy who seems to be dead but is still alive on Facebook, and that one is about the balance between our real lives and our virtual lives and how that affects people.

TVLINE | What brings Fritz back during this season?
He’s still the Deputy Chief of the Special Operations Bureau, S.O.B., and he’ll be rolling out in a tactical way as we take on white supremacists. There’s a huge growth in the white supremacist movement in Los Angeles and in Southern California, from all the way up north of Santa Barbara, down to San Diego. It’s practically like a curse, and we’re taking that on in a major way, because they’re doing major crimes.

TVLINE | Rusty’s mother returns — and I hear she’s pregnant?
She’s about four-and-a-half months pregnant when we see her. Rusty has big opinions on it, and he and his mother have to sort those opinions out. He also has to sort out what it’s like to be in a relationship with somebody, so he’s dealing with that. He’s now on the path for a long-term relationship for a college student, and he’s still not sure how to behave.

TVLINE | Lastly, going back to one thing you said before: If Andy’s out videotaping potential houses, I guess things are going pretty well for him and Sharon still. Any other hiccups there, or have they settled in to a nice groove?
They’ve settled into a nice groove, but there will be practical hiccups. Not emotional hiccups. There will be challenges. Practical challenges.