Question: Vera Farmiga better get an Emmy nomination this year for Bates Motel. She has been crushing it as Norma Bates this season! —Brian
Ausiello: You’re preaching to the choir, Brian. Everyone on that show has been crushing it this season, which, for my Monopoly money, is its best yet. Also, nothing — and I do mean nothing — will prepare you for what’s coming in Monday’s penultimate Season 4 episode. Watch it live and with a string of your Grandmother’s finest pearls because you will need something to clutch during the final 10 minutes. It’s the biggest, most game-altering episode of the show to date.

Question: Can I get anything about Chicago Fire’s Kelly Severide? —Carlynn
Ausiello: Severide and Stella’s long-awaited hookup may be short-lived, so enjoy the steaminess while it lasts. “There are some complications that arise that limit their ability to go forward footloose and fancy-free,” executive producer Matt Olmstead previews. “There is a sense that, if you moved everything else aside in terms of work and exes, these two would be really made for each other. We’ll see if they can ever make that happen.” 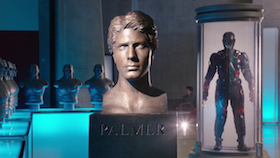 Question: Anything on my new obsession, Legends of Tomorrow? —Clay
Ausiello: Remember how Ray mentioned that he has a brother named Sydney, who must have gone on to work for Felicity Smoak? We asked Arrow/Legends exec producer Marc Guggenheim if said sibling will pop up in Star City. “[He] is a potential Arrow character,” Guggenheim confirms. “[But] we’ve actually been talking about seeing [Sydney] in Legends Season 2.” (For the record, Ray and Syd are not twins, the EP clarifies. They just happen to have “an uncanny similarity,” as evidenced by that Brandon Routh-like bust.)

Question: Some Person of Interest scoop, please? —Ashley
Ausiello: Carrie Preston’s Grace will be back for POI‘s June 21 series finale, which suggests to me a happy ending for Finch. (No, not that kind of happy ending. I’m talking about the one you get at the conclusion of a slightly illegal massage.)

Question: What happened to the “Witness Protection” category in your May Sweeps Scorecard? I assumed that was earmarked for Castle‘s Beckett. —Joan
Ausiello: Geez, nothing gets past you people. I addressed this swirling controversy during my inaugural #AskAusielloLive Facebook chat.

Question: So any scoop on what is coming up in the final Season 2 episodes of The Last Man on Earth? —Melody
Ausiello: Here’s what’s coming up this Sunday: A seismic, nearly two-minute Todd meltdown that’s been weeks in the making. Press PLAY below for an exclusive first look at his bacon-triggered freak-out which, as my shrink would say, isn’t really about bacon.

Question: Are we going to find out if Owen’s sister is alive on Grey’s Anatomy before the end of the season? —Joshua
Ausiello: “I can’t confirm or deny that,” hedged Martin Henderson (Nathan) when we asked him exactly that question, before teasing, “But let’s just say more information comes out in the [May 12] episode that sheds some light on that.”

Question: Do you have any intel about what’s next for Owen and Amelia on Grey’s Anatomy? —Eleanor
Ausiello: Viewers tired of the couple’s break-ups weren’t the only ones happy about the commitment that they made to one another last week. Kevin McKidd, who plays Dr. Hunt, was pretty pleased, too. “I think [this moment] has been in the cards for a long time,” he says. “Even though it’s been very on-again/off-again with them, they obviously have this connection. Everything pointed to them being together.” And now that they are, “they’re in kind of a honeymoon period,” finally, he adds, “enjoying each other.” 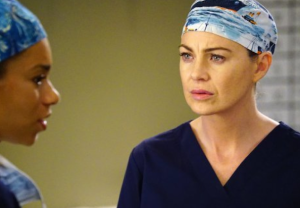 Question: How many categories/slots on your May Sweeps Scorecard does Grey‘s Anatomy take up? — Ashley
Ausiello: About a half-dozen or so. And at least one of them involves Meredith.

Question: Any word on Sara Ramirez’s contract negotiations on Grey’s? —Andrew
Ausiello: The ball is in Ramirez’s court. If she does opt not to sign on for Season 13, I think there’s a decent chance she’ll return in the fall for an episode or two to bring closure to Callie’s storyline.

Question: Anything on Thea’s arc for Arrow‘s final episodes of the season? —Jill
Ausiello: As hinted in our May Sweeps Preview package, Thea, in the wake of Laurel’s death (and arriving in her new suburban “home”!), is really going to be grappling with the question of ‘Did she become Speedy because of the Lazarus Pit, or did she become Speedy because that’s actually who she is and what she wants to do?'” says showrunner Wendy Mericle. When that question is answered by the May 25 finale, “She will have a clear sense of who she is and what she wants.” And during that soul-searching journey, “She will also be facing an old foe,” Mericle teases.

Question: What can you spill about the return of Felicity’s father on Arrow? —Mellie
Ausiello: You can expect that icy parent/child relationship to “deepen significantly” when Tom Amandes reprises his role as Noah “The Calculator” Kuttler starting May 11. Says EP Wendy Mericle, “We know that Felicity will be really exploring, ‘Is she a Smoak or is she a Kuttler?’ — and having her father there and potentially seeing him in a different light will raise some good character questions for her. She will see him in a new light. We all will.”

Question: Please keep me posted on what’s going to happen on Major Crimes. — Diana
Ausiello: The ubiquitous Annie Wersching (Vampire Diaries, Bosch) guest-stars in the third episode of Season 5 (premiering June 13) as FBI Special Agent Soto, a “smart, calculating” G-woman angling for a big win to push her career forward. To that end, Soto asks for Raydor’s help in finding a terrorist before he can strike again.

Question: Any scoop on Reign? —Lori
Ausiello: Having discovered that she is (unwittingly!) involved in a scheme to take down Queen Elizabeth, Mary fears she might end up on opposite sides from Gideon.

Question: Do you have anything about my favorite couple on Young & Hungry? –Steph
Ausiello: I sure do (assuming, of course, that your favorite couple is Alan and Elliott). The seventh episode of the Freeform comedy’s upcoming Season 4 finds the newlyweds attempting to adopt a four-year-old — and ending up with a 14-year-old girl! From her years in and out of foster care, the girl (tentatively named Keisha) has a “toughness” about her and masks her pain with sarcasm. (Um, are we sure she isn’t actually related to Elliott?)

Question: Loving all the Gilmore Girls articles! Any juicy scoop that you’ve been holding on to? —Melissa
Ausiello: Yes. And I dropped a hint about what it is and when it will be announced during my inaugural #AskAusielloLive Facebook chat.

This AAnd That…
♦ Attention Good Wife fans: I suspect you’re going to have a very strong reaction to something Alicia does (or doesn’t do) in Sunday’s series finale.
♦ This week’s action-packed Penny Dreadful (Sunday, 10/9c, Showtime) includes not only a bloodbath to rival the Mariner’s Inn Massacre but a look at the only thing on the series that we’ve ever wanted to see as badly as Dorian’s picture: Dracula’s face!
♦  Stop me if you’ve heard this already: I conducted my first live Facebook chat today. It’s called #AskAusielloLive and the video is below!