Gaining speed as it hurtled toward its June 19th third season finale, Penny Dreadful this week armed Vanessa for battle with Dracula, set up the Creature to take a terrifying gamble and changed Lily and Dorian’s relationship forever — which is a hell of a long time when a couple is immortal. Which of their risks paid off in “Ebb Tide”? Read on… 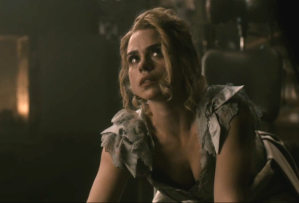 LILY’S WORST NIGHTMARE | After visiting the grave of her 1-year-old daughter, Lily challenged her army of prostitutes to prove themselves to her by going out into the night and returning with the right hand of a bad man. Next thing we knew, Dorian’s dinner table had more appendages on it than wine glasses, and Justine was feeling emboldened enough to threaten her mistress’ lover. “You want to play with me, kitten,” he shot back, unfazed, “then show me your claws.” Later, on a rare evening out alone with Dorian, Lily wondered aloud whether he was jealous of the attention that she lavished upon her revolutionaries. “What I am,” he replied, “is bored.” As such, he’d set her up to be kidnapped by Victor! When Lily awakened in bedlam, Henry informed her that they were going to make her better. “Better than what?” she replied. They were going to make her, Victor explained, “a proper woman.” So yet again, the erstwhile Brona was to be taken advantage of, used and molded by men into what they desired. This could not possibly end well.

THE CREATURE’S FAMILY REUNION | Following a near-miss with Renfield the morning after having sex with Alexander in the museum’s House of the Night Creatures exhibit, Vanessa returned home to find John Clare — aka the Creature — waiting for her. “I’m in need of a friend,” he admitted, then went on to explain that he feared, were he to present himself to his family, they would see only his disfigurement and reject him. (Son Jack’s reaction last week certainly lent credence to that theory.) In response, Miss Ives filled in her pal on their past acquaintance at the Banning Clinic. “The man I knew deserves to be loved,” she said. “And the man you see?” he asked. “No less,” she reassured him. In the end, they decided that they’d both been lonesome and unhappy for long enough. They would take the dares that life had put before them, “and may the lost souls be found,” as Vanessa put it. And what do you know? Marjorie considered her husband’s return “quite a strange and wonderful thing,” and even Jack was able to embrace his father. (Have we ever seen the Creature happier? Or, for that matter, happy?) 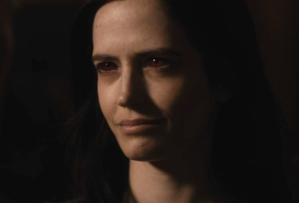 ETHAN’S RACE AGAINST TIME | As the wolfman made plans to return to the States with Sir Malcolm in hopes of taking the chance with Vanessa that he’d wasted, Kaetenay had a vision of the couple’s reunion that suggested that his chosen son was already too late to save his lost love from the vampires. (So that’s what that picture was!) Later, while sailing across the Atlantic with Ethan and Sir Malcolm, the Apache appeared in a vision to Vanessa. “You are made for the day, not the night,” he told her. “There, sir, you are wrong,” she replied, her eyes turning demonically red. Snapping out of his reverie, Kaeteney warned the wolfman that Vanessa was damned. “Not while I walk this earth,” Ethan responded. Game on! Meanwhile, back in London, before Renfield’s odd behavior made Dr. Seward suspicious, she let slip that she believed Vanessa had a split personality and, in fact, had manifested three different personalities in a single session. At the same time, Catriona was revealing new intel to Miss Ives. The important bits: In human form, Dracula was as killable as any man. Also, “he’s said to dwell in the house of the night creatures.” Catriona didn’t mean it literally, and yet that was literally Alexander’s hangout. So at last, Vanessa got it: Her new lover was Dracula!

VANESSA’S MOMENT OF TRUTH | When Vanessa arrived at the museum armed with a pistol, Alexander Dracula wasn’t surprised. On the contrary, he challenged her to tell him how he’d lied to her. In his eyes, right down to the fact that he loved her, everything he had said was the truth. Disgusted that he would speak of love after what had become of Mina, Vanessa spat on the vampire and swore that she would never serve him. But that wasn’t what he wanted at all. “I want to serve you,” he insisted, “the mother of evil.” From there, he made a compelling case for why the two of them — the bat and the scorpion — were the night creatures shunned by the world. Yet she’d never be rejected by him. All he wanted was for her to be herself — her true self. “Do you accept me?” he finally asked. “I accept myself,” she responded, allowing the vampire to sink his fangs into her neck.

What do you think? Will Vanessa be able to find her way out of the darkness? Will Justine rescue Lily? Hit the comments!