In this week’s Penny Dreadful — a particularly eventful outing, wouldn’t you agree? — Victor set in motion his plan to “cure” Lily, the Creature was reunited with his son, Sir Malcolm helped Ethan resolve his issues with his father, and Vanessa took Dr. Seward’s advice to bring in reinforcements against Dracula. And it all went so spectacularly badly that, by the end of the hour, enough characters had been killed off that Dr. Frankenstein could be kept busy for an entire season just resurrecting them all. Who made it to the closing credits with a pulse? Read on and find out.

‘I NEVER BLINK’ | Early on in “No Beast So Fierce,” Vanessa sought out (the much-missed!) Mr. Lyle for advice on combatting Dracula. But, discovering that the Egyptologist was setting off on a Cairo “jaunt” — one that might be extended indefinitely, owing to the region’s acceptance of his sexuality — she withheld her disturbing news, asking instead for a referral so that her friend could leave untroubled. “Think of me only when you dance,” he said, threatening to break my heart. “I shall have to dance more often,” she replied, making good on his threat. (Not for nothing, but this had better not be the last we see of Mr. Lyle — that character is a gem!)

Later, Miss Ives tracked down the individual that Mr. Lyle had recommended — thanatologist Catriona Hartdegen, who over brandies happily revealed all that she knew about Dracula. And she would gladly do more research, too, if Vanessa wanted. But “I don’t wish to find him in history,” Miss Ives clarified. “I wish to find him now, in London.” In that case, Vanessa should surround herself with people who care for her, Catriona advised. Isolation would only make her easier prey for Dracula.

VIDEOS Penny Dreadful Video: Behind the Scenes in the Wild West… Er, Spain

Since Sir Malcolm and Ethan were still in the States, Vanessa turned to Dr. Seward for companionship. After confiding in her patient that, years earlier, she’d killed her abusive husband with a meat cleaver, the shrink suggested that, as colorful as her small talk was, Vanessa would prefer to be talking to Alexander. Ha, Miss Ives responded. If she told him she was being stalked by a vampire, he’d think her mad! So “I’ll give you a note,” the doc cracked.

Taking Seward’s advice, Vanessa visited the museum at closing time and informed Alexander that she was being pursued by a monster that wanted to feed on her blood and make her its bride. This didn’t faze him at all — it was hardly news to Dracula, of course — but what did perturb him was the sight of Miss Ives gazing at a stuffed wolf and mentioning her last protector. “I love you for who you are, not who the world wants you to be,” he finally declared. And, with that, the two of them had sex right there on the floor. 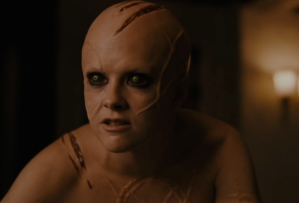 ‘I DECLARE YOU ALL UNDER ARREST’ | Speaking of Vanessa’s former protector, Ethan began the episode staring down the barrel of his father’s pistol. And, since the werewolf had no intention of repenting, Jared was about to pull the trigger… when they were interrupted by Rusk and Ostow. Although the Scotland Yard inspector gleefully arrested everyone in sight, they still all sat down to one of the most uncomfortable dinners in recorded history. First, Jared baited Ethan by revealing to Sir Malcolm that his pseudo son was responsible for the murder of his siblings. (“Say the word,” Hecate pleaded with her lover, “and I’ll strike!”) Next, Ethan put his own spin on grace. (“Our Father who art in heaven, cursed be thy name… “) Then, Ostow warned Jared that, since his men had been killed on the train by Talbot’s, there would be a reckoning. Fine by Jared, who immediately pulled his gun and shot the marshal. (Seconds, anyone?) When Rusk asked who’d summoned the snakes in the desert, Hecate transformed, and attacked with Ethan and Sir Malcolm. In the melee, Jared escaped to the chapel with a few of his men, Rusk and Hecate were fatally shot, and Sir Malcolm was saved by Kaetenay. “I knew you were too mean to die!” said the Englishman. Eventually, Ethan squared off against Jared in the chapel but found that he was unable to kill his father. No problem — as Jared taunted Ethan, Sir Malcolm shut him up permanently. 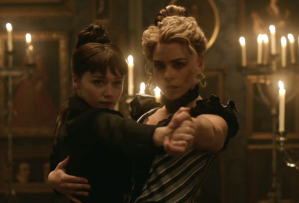 ‘WE WILL BE BRANDED RADICALS’ | While Henry helped Victor create a knockout drug that he could use to abduct Lily, the former Brona Croft cheerfully trained prostitutes on where to stab a john — using Dorian as a stand-in — in order to kill with the greatest efficacy. When Justine took a turn, she ticked off Dorian by actually pricking him and asking the women, “Would you like to see him drown in his own blood?” That night, after Lily refused to allow Dorian to cut in on her tango with Justine, he insisted on a moment alone with his girlfriend. As immortals, “we are equals,” he reminded her. Alas, she had become enamored of Justine, in whom she saw so much of her own rage. As Lily and Dorian kissed and at least superficially made up, they were interrupted by Justine and the hookers, who’d discovered Victor attempting to pull off “the worst kidnapping in the annals of crime.” Blood-thirsty Justine wanted to murder Victor on the spot, but Dorian, of all people, suggested that it would be senseless to kill Frankenstein just for loving his creation. Ultimately, Lily elected to let Victor live. However, the next time he paid her a visit, she warned, it would be his last!

‘ARE YOU AN ANGEL?’ | After watching his son struggle just to draw a breath, the Creature couldn’t help himself. He left his hiding place and went to the boy, who, before opening his eyes, said that he’d hoped the angel who’d come for him would be his father. “I will bring you medicine, whatever you need,” promised the erstwhile John Clare. “You will be well, son.” Unfortunately, when the youngster saw what had become of his dad, he screamed in horror, sending the Creature running into the night with a heart as broken as mine over Mr. Lyle’s apparent departure.

What did you think of the episode? Are you looking forward to Vanessa’s discovery that she’s fallen for Dracula? The vampire’s showdown with the werewolf? Hit the comments!