File this one under “Easier said than done”: In this week’s Outcast, Kyle told his catatonic mother Sarah that, after what she did to him while possessed, he had intended not to give a damn about her anymore. Trouble was, of course, he not only still cared, he cared a lot. So in “(I Remember) When She Loved Me,” he attempted to cast out the demon inside her. Did it work? Read on and find out. 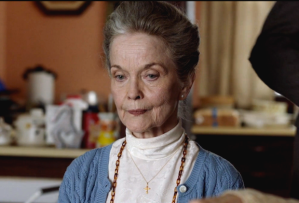 ‘CHURCH IS NOT OPTIONAL’ | Early on in the hour, Reverend Anderson hollered at his congregation — including the newly demon-free Joshua, resident Church Lady Mildred (Grace Zabriskie) and mystery man Sidney (Brent Spiner) — that there was a battle fast approaching between light and darkness. As such, the preacher wanted to see more butts in more pews. After Mass, he was approached by Kyle, who wondered whether, as Anderson insisted, he had really “freed” his mom all those years ago. Or, since what happened with her wasn’t the same as what happened with Joshua, maybe she was still possessed? Later, Chief Giles (Reg E. Cathey) reminded the reverend that his new “partner” had been “trouble since he was 10 years old,” and Mildred questioned whether Kyle was qualified to be a part of Anderson’s “righteous army.”

‘NO CONTACT’ | Visiting Sarah at Shady Lawn, Kyle confessed that he feared, rather than save her, he had “made [her] like this.” (If we didn’t feel for the guy before, we really had to after the episode’s many flashbacks revealed how close he and his mom had been before she was bedeviled.) What could he do, though? For starters, he decided to carry her out of her leaky room at the depressing convalescent home and bring her back to their house — which didn’t go unnoticed by either kindly neighbor Norville (Willie C. Carpenter) or Sidney. The next day, when Megan brought over some fruit to help wean Kyle off his patented Cap’n Crunch diet, he asked her to bring Amber a birthday present from him. At first, his adoptive sis reminded him that he wasn’t allowed to have any contact whatsoever with his daughter. But, in the end, she took the copy of Homer Price that he’d wrapped for his little girl. Alas, his attempt to feed his mom wasn’t so successful. 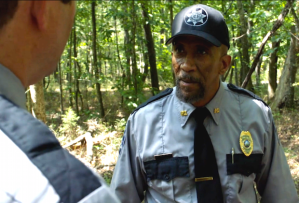 ‘ARE YOU TELLING ME THE PREACHER IS CALLING THE SHOTS HERE?’ | Off a tip about a buncha critters cut up and nailed to trees in the woods, Giles and Mark set off to investigate, the latter griping every step of the way about the fact that no charges had been filed against Kyle for battering Joshua. Was it because of the reverend? Is he in charge of law and order around there? Wolper wanted to know. Kinda yes, Giles replied — since Anderson was able to keep the peace in ways that their badges and guns couldn’t. After finding several raccoons mutilated and displayed, the cops continued down “some crazy-ass trail” to discover a derelict camper with an interior that was covered in scratch marks. As they poked around, it seemed like someone — or something? — was watching them.

‘YOU REALLY ARE THE TEMPTRESS’ | When Megan arrived at Amber’s birthday party, she left Kyle’s present in the car but, after seeing his daughter learning to ride a bike, had a change of heart and added the book to the little girl’s pile of gifts. As the celebration died down, Megan stayed behind and was on hand to see Amber unwrap Kyle’s old copy of Homer (with no to/from tag, natch). Later, Allison seemed to figure out from whom the present had come. Meanwhile, thanks to Florence’s matchmaking, Reverend Anderson had a dinner date with pretty Patricia (Melinda McGraw), who was so into him that she mentioned that her son would be out late, if he came home at all, and she’d baked a blackberry pie. Unfortunately, before he could have so much as a taste, he got a call informing him that Kyle had removed his mother from Shady Lawn. 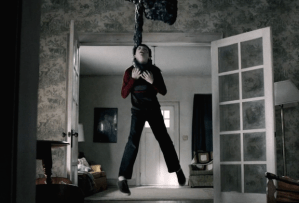 ‘I WANTED THINGS TO BE LIKE THEY WERE’ | When the reverend arrived at the Barnes home, Kyle said that he didn’t think he’d really freed his mom way back when. If he had, why was she catatonic? When the demon left her, it took a part of her with it, Anderson suggested. Unsatisfied with that explanation, Kyle persuaded the preacher to re-exorcise his mother. When that didn’t work, Kyle, increasingly desperate, tried going through the steps that had freed Joshua: exposing Sarah to daylight and (after bashing his hand till it bled) dribbling his blood in her mouth. Still, nada. Finally, Anderson gently told Kyle that he hadn’t been wrong to bring Sarah home. But it also wouldn’t be right to keep her there. Besides, if he really wanted to reclaim his family, he was going to have to let his mom go. After returning Sarah to Shady Lawn, Kyle found a note from Megan on his door at home — Amber loved his present. At the same time, Sidney stole into Sarah’s room. “Tragic to see you like this,” he said, adding that it was also sad that her son would never know how hard she’d fought to resist. Not that it mattered. “We have him, anyway,” he noted. As a tear rolled down Sarah’s cheek, we flashed back once more to the day that Kyle freed her — the demon leaving her body and apparently choking the life out her son!

Intriguing, no? Do you think Kyle is dead? An angel? And what about Sidney? Is he in league with the devil, or is he the devil himself? Hit the comments.