Since Outcast is based on a new comic-book series from The Walking Dead creator Robert Kirkman (who also wrote the premiere), the Cinemax thriller had from the get-go hanging over its head a question: Would this be the next Walking Dead?

The answer is “Eh, probably not.” But, as mentioned in TVLine’s recent review, the series does have potential. So let’s go over the key points of “A Darkness Surrounds Him,” then you can decide on your grade, and we’ll discuss in the comments. Ready? 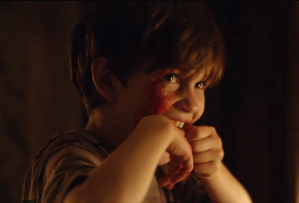 KID STUFF | The episode’s opening moments were not for the faint of heart or weak of stomach: Young, possessed Joshua Austin (Gabriel Bateman) squashed a cockroach against his bedroom wall — with his head — then went from licking up the guts to damn near chewing off his own finger. (Good, gross start, at least!) Since possession was apparently becoming pretty commonplace in Joshua’s small hometown of Rome, W.Va., the boy’s mom knew to run straight to Reverend Anderson (Philip Glenister) for an assist. Unfortunately, the preacher’s attempt to drive the demon out of Joshua was an “exorcise” in futility: The kid — or, rather, the entity inside him — kicked the crap outta the rev and gave his poor mom a bloody nose.

AMERICA’S MOST HAUNTED | Across town, Kyle Barnes (Patrick Fugit) was living in squalor in the home where, when he was a youngster, his possessed mother had often attacked him and locked him in the pantry. With some difficulty, adoptive sister Megan Holter (Wrenn Schmidt) convinced him to let her in, if only to marvel at the lack of nutritional value on display in his cupboards — “Do you even remember solid poop?” she asked — and drag him to Piggly Wiggly. He wanted her to give up on him, but, indebted for reasons as yet undisclosed, she wasn’t about to let him go on punishing himself for the incident that ruined his life. Which was? Far as we can piece together from this hour, Kyle’s wife, Allison (Kate Lyn Sheil), was at one point possessed, and he was blamed for harming their daughter. 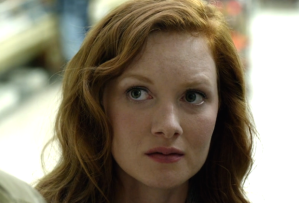 GUESS WHO’S COMING TO DINNER | At the grocery, Kyle heard from Reverend Anderson’s secretary, Florence, that, like his mom, Joshua had “fallen prey to dark forces” — which ticked off Megan (who believed Kyle’s mom had been sick, not possessed). Rather than drive her adopted brother home after their excursion, Megan took him to her house for supper — much to both his chagrin and that of her husband, police officer Mark (David Denman). Mind you, Kyle didn’t even make it to the salad course. After Megan and Mark’s daughter upset the unexpected guest by explaining what she had heard about him — “You hurt your little girl, and now you’re not her daddy anymore” — he bolted. The next day, he used the cell phone that Megan had bought him to call (but not speak to) Allison. When she hung up, he destroyed the phone, borrowed his neighbor’s car and tracked down Reverend Anderson at the Austins’ home.

EXORCISE PROGRAM | Though Kyle insisted that he wasn’t there to help with Joshua — and he doubted that the bogeyman was to blame for the boy’s behavior — Reverend Anderson recruited him, anyway. Since it had been Kyle who’d driven out the demon in his mother, he was uniquely qualified to pitch in with a, er, repossession. And that did seem to be what was on tap. When he told the kid to quit faking, the demon revealed details of Kyle’s abuse at his mother’s hands that there was no way Joshua could have known. What’s more, the demon had been trying to find Kyle for some time, and was highly annoyed that he’d been hiding. As the preacher lit sage, the demon attacked and, it appeared, took something out of Kyle (his soul?) the same way that his mother once had. Off that trauma, Kyle suggested that the rev “run, while [he’s] still got something left.” Anderson wasn’t about to quit, however. Not since he saw the devil at Kyle’s house all those years ago had he questioned his faith.

WHAT THE HELL | The next day, Kyle — hoping to learn why demons had been giving him hell his whole life — went back to the Austins’ with Reverend Anderson. “You are very brave to return,” said the devil in Joshua. But, this time, Kyle was on the offensive. Remembering all the things that he had done to drive out the demon in his mom — exposing her to light and striking her — he repeated those steps, and again, something seemed to leave Kyle and enter Joshua. “What do you want from me?!?” Kyle pleaded as he was raised off the ground along with the boy. When Joshua bit Kyle, it seemed to burn the kid, so the adult dribbled his own blood into the boy’s mouth. This made the demon absolutely apoplectic. “The Great Merge cannot be stopped!” declared the devil before spewing bile all over the ceiling and at last releasing Joshua. Afterward, Reverend Anderson asked if Kyle had gotten the answers he’d wanted. No. But now he wasn’t going to quit until he did get them. “Come and get me,” he dared the demons.

So, what did you think of the premiere? Good as The Walking Dead, dead on arrival or somewhere in between? Grade it below, then hit the comments.