Aw, hell. Since Cinemax’s new supernatural drama, Outcast, is based on The Walking Dead creator Robert Kirkman’s comic-book series of the same name, I had great expectations going into the premiere (June 3, 10/9c, and already streaming). Why wouldn’t I? I love The Walking Dead and all things scary, and am a big fan of Patrick Fugit, who stars as Kyle Barnes, a tortured soul bedeviled by demons since he was a kid.

Unfortunately, I only liked rather than loved the first episode. Fugit is certainly solid as our haunted hero, a good guy hiding out in his hometown of Rome, W.Va., after battling not only the demon that possessed his mother when he was a boy but also the one that more recently inhabited his (now-estranged) wife. And the hour is stylishly directed by Adam Wingard (V/H/S). But there just isn’t much here that we — or at least I — haven’t seen before.

After being dragged out of hibernation by his adoptive sister, Megan (Boardwalk Empire alumna Wrenn Schmidt), who owes him a great deal for undisclosed reasons, Kyle seeks out old acquaintance Reverend Anderson (Prey‘s Philip Glenister) — and is drawn into the preacher’s investigation of the possessions that have become almost commonplace in Rome. The latest victim, young Joshua, spooks Kyle when the demon within reveals details of Kyle’s abuse at the hands of his possessed mother. The devils have been looking for him, the entity adds. (I’d be lying if I didn’t admit that the creepy-kid thing works. Then again, doesn’t it always?) 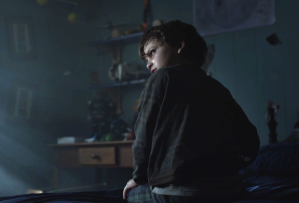 In the end, it turns out that Kyle — specifically, his blood — is better at exorcising demons than even holy water. However, before the devil departs Joshua, it warns that “the Great Merge cannot be stopped.” Which, of course, leaves Kyle with more questions than he’d hoped to answer by getting involved in the first place.

It also leaves us with a fine tease. So, although Episode 1 doesn’t break a lot of new ground for the genre — maybe, having watched everything from The Exorcist to The Last Exorcism, I’m jaded? — it does at least suggest that a compelling mythology will be revealed over time.

The TVLine Bottom Line: Neither a devil of a good time nor an “exorcise” in futility, Outcast really deserves a grade of “I” for incomplete.