The morning after Nashville‘s series finale, Charles Esten woke up a little sore — he’s been helping son Chase with his Eagle Scout Service Project, construction of some steps that go down a riverbank near their home — and a lot optimistic that the show’s fans plus Lionsgate TV’s willingness to shop the drama will help it find a new home.

“Obviously, it’s bittersweet,” he tells TVLine, referring to the end of the country-music series’ four-season run on broadcast television. “But in a way, I’ve been prepared for a long time that this thing — at least, as far as it goes with ABC — would have to end.”

Thanks to Nashville‘s near-constant bubble status every spring, renewals were never a sure thing. “I used to tell people, right in the middle of the best part of this, I would say, ‘This place is literally heaven for me.’ Well, I’m not going to use the word ‘literally.’ It’s not literally heaven,” he says, laughing. “‘This place is an exceedingly good metaphor for heaven for me.'” But I said, ‘The funny part is, if I look down at my feet, a little closer in these clouds, I’m always standing on a trap door that says ‘ABC’ on it.'”

He continues: “I don’t mean I was ever pessimistic. I was realistic… More like knowing in the back of my head, and in a way that made me more grateful every single day.”

Now that that trapdoor has sprung, Esten says he’s buoyed by positive feedback from the show’s Powers That Be, as well as the strength of homegrown efforts like the #BringBackNashville social media campaign.

Read on for more of Esten’s thoughts at the end of the series’ run… or is it?

TVLINE | I’ve been looking at Twitter and reading comments from our readers this morning. It must be nice to know so many people care about what happens to the show.
One of the things that is so exciting about this campaign, this very organic campaign by the fans of Nashville, is that it comes at this very crucial moment where there are negotiations. And when I look at those negotiations, the possibilities of where we might end up, nobody’s more grateful to ABC [than I am]… That’s been our home for four years, and I don’t look back with anything but gratitude. Having said that, if you’re going to go more, what’s exciting to me is it doesn’t feel like a tacked-on season for a season’s sake at all. For me as an actor, this show is pregnant with possibilities in terms of new writers and perhaps a new platform or a new home. There’s great faith in Callie Khouri, who was always the heart, right from the very beginning, alongside these new possibilities that it wouldn’t just be some added-on episodes at the end, that there could be some real magic left. There’s magic all over this thing. That’s always been a part of Nashville… The writing staff worked really hard for a long time, flying back and forth and making this all happen. Just as with the network, I’m grateful, but it’s hard not to be like, “Ooh, this could be interesting. This has a chance of being amazing.”

TVLINE | Were there any alternate endings you guys shot for Rayna and Deacon?
No, there were not. 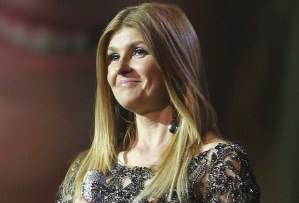 TVLINE | Last night, someone tweeted at me, “Deacon used his words!”
[Laughs loudly]

TVLINE | With that in mind, say we’re going into a fifth season —
OK, let’s do that! [Laughs]

TVLINE | — do you think Deacon has learned and grown? This season, we saw him repeat a lot of his mistakes.
I think so. I definitely think so. It was always very important to me, as the actor, that you would see the arc of Deacon’s growth. For the longest time, in a real sense, he didn’t have to grow. That’s why people isolate themselves, because they’re not beholden to anybody and nobody can tell them what to do. But then suddenly he has Rayna in his life and on top of that he has these daughters, so now there is a reason. Even the best of guys, when you’re suddenly not a single guy after 25 years of it and you’re living in a house with these young women and your wife who’s beside you all the time and is cultured and mannered… he definitely had a way to go, with not much buffer room. So you would still see remnants of the guy who, for a time, had nothing to live for but more important had nothing to live right for…

What this last season has shown is, how do you deal with grief when there’s other people around you that care about you, instead of just being on your own? He didn’t deal with Beverly’s grief with Rayna. He shut her out and he shut the girls out. He realized he couldn’t do that… All the things you do when there’s people around you that care, he hadn’t had that in a long time… That’s what I did like about a lot of that: Deacon learning that you now have these people you love and care about — that means you do have to make a whole lot of changes, not just the ones about your sobriety, but about the way you interact with the ones you love… In that last scene, they understood — fans that have been there a while — what a step it was for him to step back from the guy that had his arm around his daughter. He learned the hard way. But God bless him, he learned! [Laughs]

TVLINE | Are you in possession of Deacon’s guitar strap?
I’m in possession of it as we speak. I played with it last night. Talk about fitting: We were on stage at the Grand Ole Opry with Chris Carmack and Lennon and Maisy [Stella] doing a writers’ round right up until the show started, and later they aired it in the back room. Yeah, I had that strap with me. What is Charlton Heston’s old phrase? “From my cold dead hand!” [Laughs] Having said that, there’s a couple of them. Deacon even had a couple of them. [Production staff member] Mr. Danny Rowe has taken exquisite care of them — and me. So yeah [lowers voice to a whisper], I have it!