The following recap, by the very definition of the word “recap,” contains spoilers from the Season 2 finale of The CW’s The Flash.

Picking up right where we left off, Barry hovers over his father’s dying, mauled body, crying, “Dad don’t leave me, not again.” Standing nearby, Zoom taunts his rival: “You feel the anger, don’t you, Flash? Now, the two of us are the same.” A fight/chase around town ensues, ending with Barry poised to off his opponent — only to realize that it’s yet another time remnant. Observing Barry’s bloodthirst, the real Zoom notes, “You’re almost ready,” before speeding away.

Henry is laid to rest next to his wife Nora. With a nod of support from Iris, Barry starts to but is unable to eulogize his father. Instead, Joe speaks to Henry’s losses, being blamed for a crime he didn’t commit. “Henry Allen was proof that love can get you through the darkest of days,” Joe said. “And that love will keep him alive in all of our hearts.” Barry then finally finds words to say, promising his father to “take from [Zoom] what he took from you.”

Afterward, Barry shares Zoom’s recent warning, that he is “almost ready,” but all are at a loss on how to stop he who can rip open time breaches. Stepping outside, Barry asks Iris how he can ever find peace, having emerged from the Speed Force so sense of confidence and purpose, only to then lose his dad. Zoom crashes the quiet moment to challenge Barry to a race, to see who’s the fastest — or else lose more loved ones.

The next day at S.T.A.R. Labs, the team debates the prospect of a race — a prospect made more complicated when Harry notes that Mercury Labs is developing a magnetar aka a power amplifier that can be easily weaponized. With the right power source — as in his and Barry’s combine energy — Zoom could rip infinite multiverse planets in half (as Cisco envisioned of Earth-Two), or worse. “I have to race him. And I have to win,” Barry decides.

Confronted by Joe about his animus for Zoom, Barry makes clear, “I want to do a hell of a lot more than kill him. I want him to suffer.” With that said, Joe apologizes… for the tranq dart Harry is about to shoot him with, before locking up Barry in the Pipeline. Worse, Barry realizes, everyone on the team — Iris and Cisco included — was behind this well-intentioned double-cross. The team’s plan: Caitlin will distract Zoom while Harry and Joe slap him with a boot, at which point Cisco will open the breach to shove him through. After that, they’ll “destroy the magnetar, save the universe.”

Caitlin sets the trap, apologizes for abandoning him.says she is ready to tap into her Killer Frost side and “accept who I really am.” Zoom goes for kill, but Caitlin is just a hologram, During his confusion, Cisco vibes open a breach while Joe — after his tranq gun jams on him, oops — manually plunges the darts into Zoom, before Harry zaps the baddie through the portal back to Earth-Two. Except, Zoom grabs for Joe and takes him with! Afterward, Cisco tries but fails to “vibe” Joe’s whereabouts, while we see that Zoom has Mr. West strung up in the same lair as The Man in the Iron Mask. Asked about the mystery man’s identity, zoom explains how he created a speed drug that enabled him to run to another Earth, where he discovered “him.”  Thereafter, he discovered that the V-9 had a nasty side effect. Zoom tried to steal Iron Mask;s speed, to no effect. At that point, he got distracted by Barry’s existence on Earth-One, and kept Iron Mask as a trophy: “I even borrowed his name: Jay Garrick.”

Back at S.T.A.R. Labs, Wally frees Barry, in trade for his help — to find and save Joe.  Confronted by a furious Barry, Caitlin urges him to “stop and take a breath,” that if he forges ahead in this state, “You will lose,” Harry warns. But Barry is determined to move ahead with our without their blessing.  So Cisco agrees to “vibe” Barry to Earth-Two, to accept Zoom’s race challenge — if Joe is returned unharmed.

Gathering for the race, Zoom confirms his endgame: to use the magnetar to send a shockwave from Earth-One to all the other Earths, destroying them. With Iris charging him to “kick his ass,” Barry readies to race Zoom, enough laps to power the magnetar — unless Barry can somehow stop him first. Or, if Barry bails, Joe dies. “Run, Barry, Run,” Zoom growls, and they’re off!  Sure ’nuff, the magnetar begins to get powered, emitting a beam into the sky. Barry though manages to jump back in time and create a time remnant of himself to save Joe, after which Zoom tackles him — and then cackles he’s too late to save the multiverse. Barry’s time remnant races on a loop to counteract the pulse, killing himself in the process, while Barry whales on Zoom. At the end, Barry is able to go for the kill, but instead lets the time wraiths do the dirty work for him, escorting Zoom off to who-knows-where.

The drama is not over yet, though. 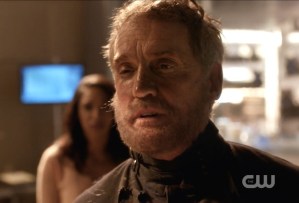 At S.T.A.R. Labs, Harry and Cisco remove the Iron Mask, to reveal the real Jay Garrick — who is the spitting image (give or take some facial hair) of Henry Allen. (Read our Q&A with John Wesley Shipp here.) Barry freaks a bit, but is soothed some by Joe. Jay cleans up and suits up, then happily crushes the power-dampening mask he’d worn for too long. He dons the helmet that Zolomon once wore, if only as a symbol of hope, then plots his way back to Earth-Three, his home, by way of Earth-Two — to which Harry and Jesse are also heading. Harry says some sad goodbyes, even to Cisco, who creates a breach for the trio to travel through.

Afterward, Barry cannot help thinking about his father’s doppelgänger — how even after beating Zoom, “Why does it feel like I just lost?” Iris suggests that pursuing what they have as a couple might bring a good something to his life, but he says he needs to “fix” whats wrong with him first, to “find some peace.” “You waited for me for years,” Iris says. “I am going to do 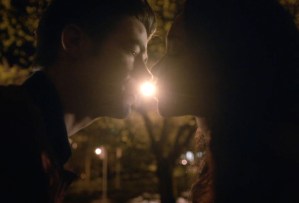 “I love you, too. I always will,” Barry says after a sweet kiss. After Iris heads back inside, he continues, “…and that’s why I’m so sorry. But I have to do this.” At which point he speeds back in time to save his mother on that fateful night and stop Reverse-Flash, as his Season 1 self looks on… before vanishing. Nora is a bit wigged out, but adult Barry assures her, “You’re safe….”

What did you think of the Season 2 finale?