The title of this week’s Nashville episode is “It’s Sure Gonna Hurt.” And given the series’ recent cancellation, well, it does.

Not because the hour is kicked off by a cameo featuring the co-hosts of The View (though that is painful). Or because after all these seasons, the show still can’t find something for Will to do other than “be gay.” Or because Elton John guest-stars mainly to prop Gunnar’s ego. Or even because Derek Hough tries to make spaghetti squash sound interesting.

This week’s Nashville is a hard one because, by tossing Rayna and Deacon into an intensive couples’ therapy session that forces them to review their entire relationship, we’re reminded once more that these two are the heart of the series. And though that heart is stuck on a destructive carousel and often sacrificed at the altar of less satisfying storylines, it’s still tickin’, y’all.

What might Rayna and Deacon’s love story, fraught though it may be, have looked like in a rejuvenated, revamped, Herkovitz-and-Zwicked Season 5? Would it have been Big Red-on-Deke’s-doorstep-Season-1 good? Would it have been so different from what came before, it would’ve felt disconnected from the rest of the couple’s narrative? Unfortunately, we’ll likely never find out. And yeah, I’m bummed about that.

But there’s a little more rock left in this crocodile, so let’s get to the highlights of the hour.

WERK WERK WERK WERK WERK IT OUT | Rayna and Deacon have booked the entire day with a marriage counselor, and they spend the time crying, yelling, looking hurt and bemoaning the cycle they always seem to find themselves in: “Betrayal, destruction, abandonment, forgiveness,” Rayna says as Deacon sits so far away from her, it looks like he’s trying to merge his physical being with the couch.

After separate sessions, the therapist helps Rayna see that she has a history of gravitating toward men who let her down (like Deacon and her dad), and Deke has a “great sense of guilt and remorse” about… pretty much everything related to Rayna. “The tough question you both have to answer is: What are you both getting out of this relationship?” the counselor asks them. Ooh, ooh! I know this one! Heartbreak and ulcers?

After a nearly silent ride home, Deacon declares, “I’m done being the screw-up in your life” and basically tells Rayna the ball’s in her court as to what comes next. But after they both agree that their chief desire is to bring Maddie home — UGH Maddie, why is everything about you?! — there is a tiny thawing when Rayna tentatively touches her husband’s back in bed that night, and he slowly reaches for her hand. You’re totally going to leave Rayna and Deacon in a not-great place, aren’t you, Nashville?

I GUESS THAT’S WHY THEY CALL THEM THE BLUES | Autumn’s tour is on a break, so Scarlett goes to Chicago to shoot that headphones ad they talked about last episode. And Gunnar joins Autumn on a jaunt to Boston “to see my old friend, Elton John” and DOUBLE UGH to you, lady.

So while a photographer pokes at Scarlett’s emotional soft bits in order to get a truthful shot — because God knows, when I’m ugly crying, I want someone with an expensive lens and no sense of boundaries all up in my face — Gunnar gets invited on stage by Sir Elton himself. “Please give a big welcome to Gunnar Scott!” Elton shouts to the crowd. “Who is that?” the crowd shouts back. (I kid.)

After the show, Gunnar is primed to buy what Autumn is selling: that he’s a solo-caliber artist who deserves to strike out on his own. Oh, “and in case it wasn’t already abundantly clear, I like you, Gunnar. A lot,” Autumn chirps. So while Scarlett is sobbing to Noel that “I’m in love with him, in love with Gunnar,” Gunny is getting ready to shag Autumn and HOLY SAM PALLADIO TORSO. Suddenly, I’m not so against this storyline. 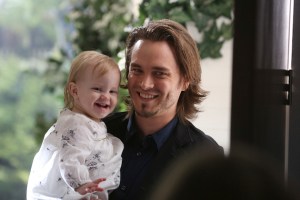 NOAH IS NUMBINGLY NORMAL | Noah decides he and Juliette need to spend normal people time together, so he flies to Nashville and shows up on her doorstep. But sadly, the Hollywood star turns out to be just kind of a boring guy who’s good with Cadence and knows his way around starchy vegetables.

But Noah’s appearance in Music City is enough to rile up Avery, who spends a significant amount of Layla’s album-release performance at The Bluebird preoccupied thinking about how many times Noah may or may not have Shenandoah’d his girl. And when Layla realizes, she causes just enough drama to turn the focus back to her. Gross. (Also, you wanted Avery’s tie to “match” your… black dress, Layla? It’s not exactly salmon or celery or cerulean. Couldn’t he literally reach into his closet blindfolded and pick an ensemble that would complement your LBD?)

A DAD REDEEMED | After that View bit, in which Luke once more defends Will against the Cynthia Davises of the world and Raven-Symoné nearly looks directly into the camera, the men of Wheelin’ Dealin’ Records decide that it’s time for Will to start doing his own press. But then Luke gets a call from the infirmary at Fort Benning, where Colt is stationed, and he has to hurry to his son’s side.

So Will handles a radio interview on his own, and it goes so well that a young gay man seeks out the singer at his home and informs him that he’s a role model who had a positive impact by living his “truth.” The encounter revitalizes Will, who decides that he’s going to go on Davis’ talk show and confront the bigoted bully in person.

Speaking of bigoted bullies, turns out that Colt’s arm is broken and his head is concussed because he fought some homophobic jerks on the base who were talking smack about Luke defending Will. And though he’s in rough shape, he’s proud of his dad for once, so maybe the stitches are worth it.