Leave it to Scandal to concoct a presidential race so twisted, it makes what’s actually happening in real-world America seem like… well, politics as usual.

Below, Young takes us inside #TeamMellie’s political process, explains the science behind her sparks with Marcus and previews the season-ending twist that she ranks among Scandal‘s most shocking.

TVLINE | OK, let’s talk strategy. How are we going to take down Frankie?
Right now, Mellie believes the greatest cannon in her arsenal is Liv. I think she feels like, with Liv by her side, they’re like Wonder Woman’s gold cuffs. There’s nothing they can’t deflect, and there’s no strategy they can’t employ. But what happens on Thursday night … just changes everything.

TVLINE | When Mellie really wants something, she can become… I don’t know if “scary” is the right word.
[Laughs] Focused. She becomes focused.

TVLINE | Yes, focused. Will we see that primal, competitive side come out more as the race progresses?
Mellie has learned so much about herself through this campaign. It’s so much easier to be a backseat driver than it is to be behind the wheel. Over the course of this primary season, it’s been incredible to watch her really mess up, really be vulnerable and be ready to give up. She’s really had a crisis of conscience. Now that she’s the nominee, and it’s so close, that thousand-yard stare is back. A lot of the doubt has burned away, and I think she’ll be shocked at what she’s willing and able to do to grab her dream.

TVLINE | I just keep thinking back to that scene where she realized that America hates her…
It’s a lot to take all that scrutiny and disgust and ire. And it’s such another level with women, because there’s the visual component. You talk about things you would never talk about with men when it’s a woman in that situation. It gets very personal, so it’s been a very sobering — often heartbreaking — ride for her. But there’s so little room for self pity in politics, so she just has to thicken her skin and move on.

TVLINE | Now that Mellie is the Republican nominee, how will Fitz factor into her campaign?
Well, it’s never simple between Fitz and Mellie. In so much as he is no longer working against her, I think she knows better than to assume he is therefore working for her. Tony [Goldwyn] and I have a beautiful scene in the finale. They have so much love and respect between them, but at the same time, so much fury and jealousy and blame. The two of them in one room is just catalytic, so to have them on the campaign trail together is both a boon and a huge minefield. 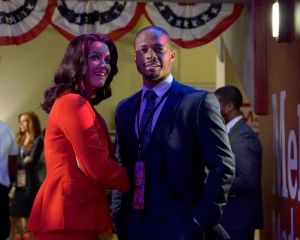 TVLINE | Speaking of the men in Mellie’s life, I don’t know what’s going on between her and Marcus, but I really want it to happen. What is it about those two that just clicks?
No one ever tells Mellie the truth like Marcus does, and he somehow tells it in a way that she can hear it. She doesn’t shut down and come out of the corner fighting. He sees her and gets her and he’s really good for her. She trusts him, and she’s started to lean on him for advice and council in a way she hasn’t done with anyone else… except Liv. [Liv and Mellie] have had a wonderful spring together, really coming together, which was so delicious. Those two women have such potential for deep, deep friendship. They have so much in common, but there was so much dividing them.

TVLINE | Do you feel like a love interest has been a long time coming for Mellie, or do you prefer seeing her stand on her own?
I feel like e met her in the ugliest part of her Fitz sickness; she was jealous and angry with all these broken dreams. And then she lost her son! There was such a ride with the end of their marriage. She’s finally free again, really starting to get well, and I think she would love someone to share all of this with. She really deserves someone who reciprocates those feelings, and how wonderful would it be for both of her dreams to come true — to be in love and in the Oval Office? Of course, this is Shondaland, so that would be short-lived. But for however long!

TVLINE | I’ve enjoyed Mellie and Liv’s budding friendship. What are the odds it’ll survive the finale?
I think the knowledge of what happened with Andrew is just a ticking time bomb, and it’s safe to say that it’s just waiting to explode between them.

TVLINE | The promo for the finale insists we’ll “never” guess how it ends. What was your reaction to the big twists?
We freaked out! There have been a few table reads that were just so shocking. I mean, they’re always amazing, but this one and the one at the end of Season 2 — when Olivia said “…Dad?” — and then the one where we killed Little Jerry. There have been a few that were just so unlike anything we could have imagined, the table reads were outrageous.

TVLINE | Can you please start filming those?
I know! We’ve actually talked about that, because they’re so good. Even at the table read for last week’s episode, we all cried at least three times. Those table reads are special.

What do you make of Young’s bounty of hints? Any hopes/fears for tonight’s finale? Drop ’em in a comment below.