Is there another epic onscreen smackdown in Christine Baranski’s immediate future?

The actress, whose Good Wife character Diane KO’d Julianna Margulies’ Alicia in the CBS drama’s incendiary series finale last Sunday, will find herself at the center of another TV showdown when she reprises her role as Leonard’s mother Beverly in Thursday’s Big Bang Theory season-ender (CBS, 8/7c). In the episode, Beverly comes face-to-face with her estranged husband Alfred (played by Judd Hirsch) and exec producer Steve Molaro confirms that fists will in fact fly (although they may be of the metaphorical variety).

“I don’t think things are going to get as physical [as they did on The Good Wife], but verbally she will slap him a few times,” previews Molaro, who describes the dynamic between the exes as “acerbic and caustic.”

Things were far less tense off screen. Molaro says the opportunity to have comedy MVPs Hirsch, Baranski and Laurie Metcalf (who’s back as Sheldon’s mom Mary) together in the same room at the same time was “a treat for all of us,” adding, “These people are legends.”

Leonard and Penny’s quasi vow-renewal provides the backdrop for the all-star episode, although viewers won’t actually see a wedding. “We won’t get that far,” Molaro reveals. “This episode takes place the night before the ceremony and there’s a lot of story to get to just in meeting Leonard’s father for the first time and reintroducing Mary and Beverly.”

Molaro also had to carve out a few minutes for the requisite cliffhanger, which he says will be lighter than the Penny/Leonard-Sheldon/Amy upheaval that closed out Season 8. “I don’t know if this is quite as explosive,” he assures, “but it’s still very character-based and extremely interesting for everybody involved.” 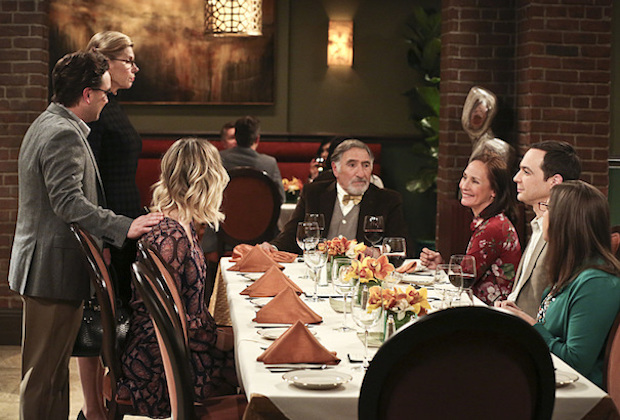