Problem: The Flash aka Barry Allen has lost the speed needed to defeat Zoom.

Such is Harrison Wells’ out-of-the-box thinking as The CW’s The Flash serves up Episode 20 of 23 this Tuesday at 8/7c. TVLine invited Carlos Valdes to share Cisco’s opinion on the volatile idea to get Barry back up and running, preview the brother of a twist to come and offer the latest tease for the much-anticipated, highly speculated Man in the Iron Mask reveal.

TVLINE | Harry is looking to fire back up the particle accelerator… and explode it. Where does Cisco stand in that debate?
It’s a terrible idea, obviously. The worst idea of all time. But the fact of the matter is there’s no other option at this point. The team, and Earth-One in general, has been backed into a corner, and the only way to save Caitlin and stop Zoom is to get Barry’s speed back. It becomes less a matter of the ridiculousness of the plan and rejecting that and more a matter of having no other option.

TVLINE | The promo brings up a point I didn’t remember, which is that Barry ended up in a long coma the first time around.
Exactly. This could kill him, let alone put him in a coma. Again, we’ve run out of options, so this seems to be the most rational choice to make. And that’s OK, because Harry is the one developing the tech and we know that he’s a very, very smart individual whose heart is in the right place. 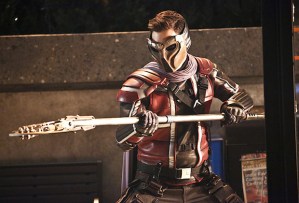 Cisco’s initial reaction to vibing, seeing the Earth-Two villain Rupture, and then realizing that it’s his brother Dante over there?
There’s a lot of confusion, and a lot of concern. The last time we left Cisco and Dante (played by Nicholas Gonzalez), Cisco had to make the choice to give up Barry’s identity to save his brother’s life, and he did that because family and his brother are so important to him. He will always make that choice, deep in his heart. Now, you’d think that traumatic circumstance would have brought them together, but it actually didn’t; in [this episode], their relationship is more hostile than ever, because there is a lot of resentment about what happened. That hostility continues, but the onset of Rupture kind of complicates things and forces Cisco to make the relationship come together.

TVLINE | What skills does Rupture have? What has he got going on?
Rupture has a badass mask, and this crazy-ass scythe that can basically tear through anything and set things on fire. [Laughs] He’s actually a really, really formidable opponent. He’s one of Zoom’s most powerful henchmen, so it’s not going to be easy to bring an end to him.

TVLINE | Speaking of Zoom’s many henchmen, does Cisco get to render an opinion on Black Siren (played by Arrow‘s Katie Cassidy in the May 17 episode)?
Yeah, but it’s not the reaction that you’d think Cisco would have, because the wound of Laurel’s death is pretty ubiquitous in this DC TV universe. We see there’s an Earth-Two Laurel, a version of Laurel that’s alive, and that does things to somebody’s consciousness, especially after processing grief. There’s definitely a bit of shock there and difficulty grappling with reality.

TVLINE | I have greatly 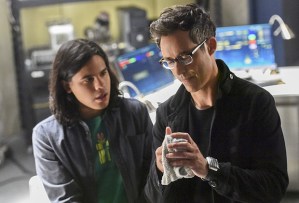 enjoyed the “mutual snark society” between Cisco and Harry this season. Is that as much fun for you and Tom Cavanagh to play as it seems?
Oh, absolutely. It sorts of continues off camera, after they yell “cut.” [Laughs] That’s actually what our relationship has been for the most part, even throughout Season 1. Tom’s a very playful actor and I am as well, so we try to engage in all sorts of banter and shenanigans all the time. It’s been really refreshing and really natural at times to play these things. Also, you never know what’s going to happen. We always bring in ideas in the moment, and that allows what you see on screen to feel spontaneous.

TVLINE | What was it like having such a geek boy like Kevin Smith (Clerks) direct the May 10 episode?
I had no expectations and literally no idea what to expect, and he came on board and it was the best directing experience that I’ve had on the show, personally. He killed it, knocked it out of the park, man. 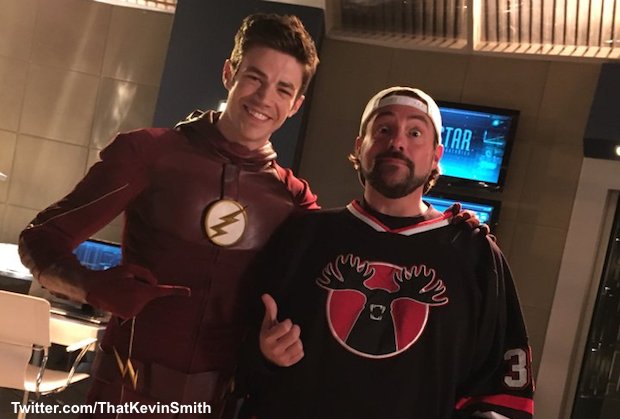 He was so giving as a director, so trusting. He essentially allowed so many of the people working on the show to have the freedom to tell this story the way that they knew how. We’ve been telling this story and living with these characters for two years now, so we know this show pretty well. Usually, somebody will come in and sort of enact their vision of this story and have their say in how they want to frame the story, but Kevin’s approach was unique in that he allowed us as a collective team, as a group of over 100 crew and cast, to feel out this story. It was very hands-off at times, and that made for some great work. And not only that, he was very big in encouraging a positive energy on the set. Before we’d roll, he’d be like, “Best job in the world, people!” and that’s infectious.

TVLINE | What can you tease about the Iron Mask reveal? Teddy Sears told me you all had some theories….
[Laughs] First of all, when I read who the Man in the Iron Mask was, I did not believe it. I was like, “What? What??” I think “What?” is going to be the No. 1 buzz word for that reveal. It kind of throws you for a loop.