The First Lady, who will guest-star on the May 3 episode of NCIS, will also appear on Monday’s installment of The Voice, NBC announced Thursday.

In celebration of the fifth anniversary of their Joining Forces initiative — which calls on Americans to rally around and support service members, veterans and their families — Obama and Dr. Jill Biden will join host Carson Daly, the four coaches and an audience filled with active duty service members, retired service members and military families to discuss the program.

* The Vampire Diaries alum/Containment star Chris Wood will recur on Season 2 of PBS’ Mercy Street. According to Deadline, he’ll appear on the Civil War drama as Captain Lance Van Der Berg, a handsome Union captain lodging at the Green home, where he strikes up a budding romance with AnnaSophia Robb’s Alice.

* Drew Barrymore will narrate First Dates, NBC’s upcoming dating show that examines a variety of real first dates that take place during a single night at the same restaurant.

* Beginning Monday, May 9, at 11:30 am ET, Boomerang will begin airing daily episodes of Peanuts, a new animated series based on Charles Schulz’s iconic comics.

* Netflix on Thursday released the key art for Chelsea Handler’s eponymous talk show, debuting Wednesday, May 11. View it below: 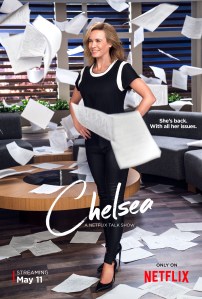