Outlander‘s Claire Beauchamp Fraser goes by many names: “Sassenach,” “Lady Broch Tuarach” and “madonna” are a few favorites. But Stanley Weber, who plays the villainous Le Comte Saint Germain in Starz’s historical drama, has another to add to the list:

“She is ‘the fuel of his rage,'” he tells TVLine in advance of this week’s episode, which finds the French aristocrat having several highly charged run-ins with the Frasers. “Claire and Jamie help to enrage him and infuriate him. They push him, definitely.”

The French actor made his Outlander debut in the season premiere, when Claire’s snap (and spot-on) diagnosis of a sailor with smallpox led to the burning of St. Germain’s ship — and the pricey cargo it carried. 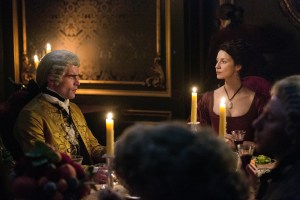 “When he sees his boat burning, it’s huge. And it’s because of her,” Weber says. “On the other hand, he’s not an easy guy to deal with. He’s really concerned with his own purposes, which is to thrive and reach the top of the court, being close to the king and having a wealthy business. As soon as the Frasers step in, it’s a threat. And he deals with threats by being radical.”

How radical? Let’s just say that Saturday’s installment (9/8c) involves poison, a violent attack and a uninvited appearance at a dinner party hosted by Jamie and Claire. But would you expect anything less from a character based on an actual historical figure who reportedly dabbled in alchemy and sparked rumors of immortality?

Weber notes that St. Germain’s singular drive — and lack of fleshed-out home life — “gives you a lot of freedom and a lot of space to give him a back story and imagine a lot of things about him… keep him very mysterious, which is good for the audience and good for the people around him, because they never know what he’s going to be up to next.”

Especially if that bit about le comte being un-killable has any kernel of truth to it… Speaking of which, Weber’s own father, actor Jacques Weber, had a funny story to share with his son.

Turns out, someone claiming to be St. Germain introduced himself to the elder Weber in a nightclub 16 years ago. “I was like, ‘That’s interesting,'” the actor says, laughing.