Two couples got their swerve on in this week’s Nashville. One was a foregone conclusion. The other was an abomination.

That second couple I mentioned? Scarlett and Gunnar. But was anyone seriously worried that wasn’t going to happen? At least we got a new performance of an old favorite out of them before they started pawing each other like counselors in the art shack on a hot night at sleep-away camp.

In other news: Will’s still gay! But (said like the dad in Heathers) Luke loves his proud gay artist! Read on for the highlights of “Baby Come Home.” 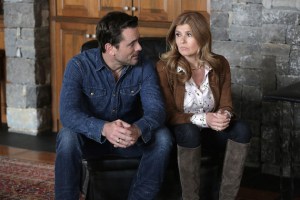 OUR NATIONAL NIGHTMARE CONTINUES | Raise your hand if you thought the weeks following Rayna and Deacon’s extremely long-awaited Nashville wedding would be full of cuddlin’ and kissin’, not affadavits and jail visits. But the Maddie emancipation drama continues, with the teen serving her legal parents — aka Rayna and Teddy, who’s still incarcerated — with papers requiring them to be in court in 48 hours. Ray thinks if she can just get a moment alone with her kid, things will be better. So she sets up a fake meeting with Cash (which yields nothing) and then waits outside Cash’s home until she can physically stop Maddie for a quick, tearful conversation (which yields even less).

After Teddy confesses to his daughter that her Edgehill “deal” was really just a blackmail move by Jeff Fordham, he then has to explain why: AKA his tryst with the pay-for-play escort known as Ol’ Leopard Panties. So now Mads has even more in her Teen Girl arsenal, and she levels it at her mom as she demands to know why the truth was kept from her. Rayna’s explanation — that she was just protecting her from heartache — doesn’t fly… though things seem to be looking up when Maddie arrives at the Ryman just in time to sing with Daphne at a charity show.

“I’m so glad you’re home,” Rayna gushes. “I’m not,” Maddie grits, thinking no doubt of Cash’s undoubtedly embellished recount of the fake meeting earlier that day. So with a sobbing Daphne clinging to Deacon, and Rayna barely holding it together onstage, Maddie stomps out with Cash in tow. See you in court, kid!

VERY BAD THINGS | Juliette takes the stage for the first time since joining Luke’s tour, and she is effervescent up there in her beaded deep-V gown. She works the stage. She nails the performance of “One Place Too Long.” And as everyone grooves backstage, Layla fumes. When Layla returns to her tour bus, Avery’s there, working on a song. As they listen to it on a shared set of headphones, their faces are thisclose… and that’s when Layla goes in for a kiss. Avery kisses her back. Then Cadence wakes up, crying, because THIS IS A TRAVESTY. He uses that as an out and hustles the baby back to the hotel.

The next morning, Avery is all, “It’s not you, it’s me,” which Layla doesn’t want to hear. And when Juliette is frustrated that her ex doesn’t want to join her on stage for a song, she takes Glenn’s advice and just tells Avery the truth: She wants them to try being a couple again, because she’s better now. Avery’s not having it. “What you do to me is what you did, and you’re gonna do it again!” he cries, but Ju stays the course, telling him to take his time and find her when he makes his decision.

But when Avery makes a decision, it’s a really bad one that doesn’t involve Cadence’s mama at all: He knocks on Layla’s door and kisses her, all in this time. In my notes, I write, “Ugh. Ugh. Ugh.”

THE NO-LONGER-EXES? | Scarlett passive-aggressives Gunnar until they get stuck in an elevator during a blackout. Rather than unravel all the knitwear Scar is wearing, fashion a rope and rappel to safety, they talk until she admits that she’s mad he slept with Autumn. He sets her straight, they share a bottle of old Scotch and then perform “If I Didn’t Know Better.” Major props to Sam Palladio for that slick, well-executed, almost-but-not-quite-a-go-in-for-the-kiss guitar reach.

When they finally part ways at Scarlett’s room, it takes her one nanosecond of heavy breathing before she’s in his arms and he’s pulling at her clothes. I’ve never booked passage on this ‘ship, but even I have to admit: This scene is hot.

PLAY THE GAY! | When Will’s radio showcase is poorly attended, Luke uses an appearance on Good Morning America to promote his new artist and to shame radio programmers who won’t play a gay singer’s tunes. Ken, Luke’s manager, thinks the whole thing is a bad idea. (Side note: Did anyone else suspect that maybe Ken, who gives off an anti-LGBT vibe, had sabotaged the showcase in the first place?)