Last week’s results episode of The Voice ended with the most shocking (musical) fatality since [spoiler] got bumped off [spoiler]. Indeed, Emily Keener, the third highest-selling artist on the iTunes singles chart from Top 12 night, wound up in the Bottom 2 — yes, Virginia, Facebook and Voice app voting counts too — and failed to score the Twitter Save.

Would there be a return to sales-driven logic and predictability for the Top 11 Week elimination? The forecast looked hazy at best after Nick Hagelin — whose brutally flat “Your Body Is a Wonderland” ranked third-to-last among his compadres — was sent to safety by Carson Daly only a few minutes into the telecast.

But hey, maybe executive producer Mark Burnett is finally catching on to the idea that suspense can actually be a good thing — especially in the world of reality competition results, where a 60 second announcement needs to last 60 minutes.

When it was all over and Carson Daly’s heart rate returned from Code Red to his typical Code Orange, the two vocalists who landed at the bottom of the iTunes pecking order wound up singing for their lives. And whether or not your fave was in jeopardy, there’s something righteous about an artist’s ability to spur downloads having a direct correlation on whether or not they advance, no? Otherwise, how is this exercise any different from, say, America’s Next Top Model?

With that said, let’s recap the action — with the understanding that the less I say about Team Xtina’s explosion of smoke, dancers and holleration on “Live and Let Die,” the better.

Daniel wasn’t stellar, but Owen botching his lyrics not once, but twice — combined with his painfully off-key final glory note — made the decision clear:

For once, my thought process was in line with my fellow Americans*. (*FWIW, this is not a reference to the election results crawl on the bottom of my screen.)

What did you think of The Voice Top 11 results? Did America get it right with the Bottom 2? Did the correct artist get saved? Sound off below! 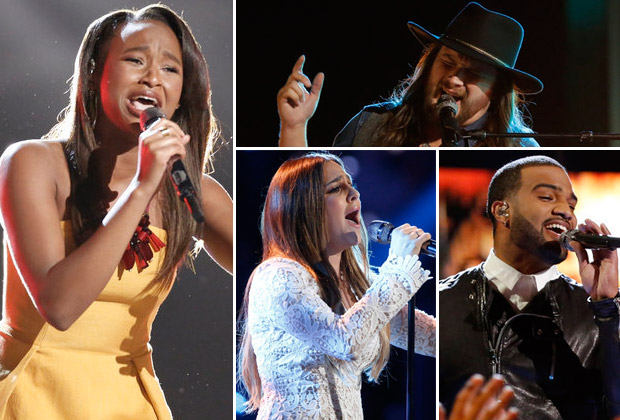