To paraphrase the lyrics of a Juliette Barnes tune, trouble is — for Nashville‘s Avery Barkley — an ex-wife for whom he still yearns and a scheming singer with too much time and him in her head.

And unfortunately for the band leader/new father, this Wednesday’s episode (ABC, 10/9c) finds him flanked by the two women as Luke’s tour gets underway.

In the hour, Juliette’s success on stage boosts her confidence and prods her to try to re-start her relationship with Cadence’s dad. But Jackson says a fix to the former couple’s problems isn’t as easy as saying “I’m sorry” and hugging it out.

“He’s trying to protect himself and have boundaries, but also not be a jerk,” the actor tells TVLine. “It’s not always an easy balance when he’s been hurt.”

Read on for Jackson’s thoughts on the chances of an Avery/Juliette reunion, the “solace” his character finds in Layla and the training that helps him churn up believable tears at a moment’s notice. 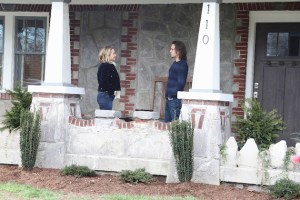 TVLINE | Since Juliette has been back from rehab, it feels like Avery repeatedly gravitates toward his ex, then stops himself. Is that the trajectory for the rest of the season for them? Is there the possibility of a reunion?
Well, I’m sure [the show’s producers] wouldn’t want me to speak on the rest of the season, but that’s certainly the current dynamic with them. I don’t think he’s ever loved anyone as much as he loved her, so even though they’re not together at the moment, Avery deeply loves her. It’s just one of those things that no matter what happens, when they’re in the room together, they both feel that connection and it’s a really painful thing, but there are a lot of deep trust issues there. So he’s trying to get his life back together and move on, and yet he’s still constantly feeling that tension and that pull towards her.

TVLINE | There have been so many episodes this season where Avery is a raw bundle of emotion; our readers like to point out that you had all that on-screen crying practice as General Hospital‘s Lucky. Is it easy for you to access that?
Oh, it’s incredible training. I was 11 years old when I started, and I was very blessed to work with Anthony Geary and Genie Francis, because they’re incredible artists. They really laid the foundation for me with all that stuff, which I still carry with me. Plus, you’re doing so many episodes in a year on a soap opera that you really do just get to experiment with a lot of different things in terms of acting preparation and approach. Some things you find work really well and others don’t. And it only airs once, so it’s not a good feeling if it didn’t go well. It’s amazing training, but [acting is] always a challenge no matter what you’ve experienced. It’s always a new situation… There’s always a sense of walking a tightrope, and I don’t ever really take it for granted, so I always try to put my heart and soul into it.

TVLINE | Let’s talk about Layla: How serious of a threat is she to Juliette, and by extension, Avery? Will we see her have any success in her plans?
[Laughs] You know I can’t answer those questions!

TVLINE | You can tell me whether or not she has any wins along the way.
It’s hard for me to know that exactly. She’s definitely been a complicated character, because she does have those nefarious motives here and there. At the same time, there’s been a lot that they’ve done to humanize her and show a sincere person who is suffering a lot with her broken marriage and then the death of Jeff Fordham and everything.

Right now, Avery and her are just connecting. They’re finding some kind of solace in friendship with both, in essence, losing the person that they love either through divorce or death. That’s where she’s coming from. There are some vengeful motives in her, but I think there’s also something genuine that that she is appreciating who Avery is. Having those complexities is always fun to play around with as actors.