If ever there were a poster child for living in oblivion, Game of Thrones‘ John Bradley says, Samwell Tarly is it.

Sam, who at the end of Season 5 left The Wall with Gilly and her infant son just prior to the fatal attack on Jon Snow, has no idea that his best friend is bleeding out into the snow — and Bradley asserts that it’s better that way.

“Sam’s got himself, over the course of Season 5, to a point where he’s pretty confident,” Bradley tells TVLine. “He had this aim… where he just wanted to get Jon into power so he could wrangle his way out of Castle Black with Baby Sam and Gilly. He’s achieved that.” 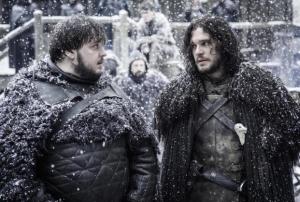 But if Sam knew that Jon had been murdered not long after the wannabe maester left for Oldtown, “he’d feel the guilt of it. He’d think, ‘Maybe if I was there, I could’ve done something to help. Maybe I could’ve stopped it from happening. He’d burden himself with that guilt, because that’s what he’s done all his life.”

Bradley elaborates that his alter ego’s chronically low self-esteem has gotten a boost during his time in the Night’s Watch — his status as one of the few able to singlehandedly fend off a white walker doesn’t hurt, either — but that Sam, at heart, is “fundamentally a weak person.”

So he’s fine with the notion of Sam being far away, studying to replace Maester Aemon and seeing to the safety of Gilly and the baby, all the while mistakenly believing that Jon Snow remains Lord Commander of the Night’s Watch.

“I think it’s best if he doesn’t find out,” he says. “Because it would destroy every single ounce of confidence he’s been allowed to build up.”

Game of Thrones returns for a sixth season Sunday (HBO, 9/8c). — With reporting by Michael Ausiello