Rebecca Mader was as pleasantly surprised as anyone to recently learn that Once Upon a Time‘s resident wicked witch, Zelena, had a chance at life-long romance, with Underworld overlord Hades, but dismissed it because she felt unworthy.

“Who knew! I did not get the memo,” the British beauty says of the bittersweet development. “That was a really cool moment. Like, “Wait, what? [He has loved me] this whole time??”

Indeed, in his latest bid to offer Zelena “happily ever after,” Hades this Sunday (ABC, 8/7c) will present a plan for the two of them to escape the Underworld — and in doing so, entrap Regina and the rest of the Storybrooke heroes there forever. Mader shared with TVLine a peek at the love-versus-family dilemma to come.

TVLINE | Hades (played by Greg Germann) this week lays out his plan to escape the Underworld. What does Zelena think about it?
I think she’s hashtag #torn, because part of her wants to try to trust him. He’s told her that she’s his true love and that True Love’s Kiss will restart his heart, and then they can go and leave everybody behind. But a part of her is like, “I don’t know if I want to leave Regina behind actually.” It’s a bit weird for her because she’s starting to have sisterly feelings for Regina, so it’s like, “Well hang on, if I get my own happy ending, it will be at the expense of my new family. It’s a horrible position to be in.

TVLINE | I love that she’s torn though, it’s such growth for her.
It is. And the heroes aren’t after her at the moment, so that tension is not the same as it was in Season 3. They’re not looking to tear me down, so where’s the vengeance? Their vengeance is towards Hades, they hate him but they don’t hate me. And I want to be with him, but that means the expense of them…. Her morals are starting to kick in, her values are changing, her heart is opening…. Having a kid is softening her, so it’s a really complex, interesting time in her arc. And it’s been really, really fun to play, I’ve really enjoyed it.

TVLINE | Is Zelena legitimately giving Hades a shot here? Is there any possible con at play?
I don’t think she’s got her witch’s con hat on. She’s really thinking, “OK, he’s telling me he loved me this whole time. He built me a whole Storybrooke!” I mean, no bloke has ever done that for me in real life, so that’s kind of a big deal! 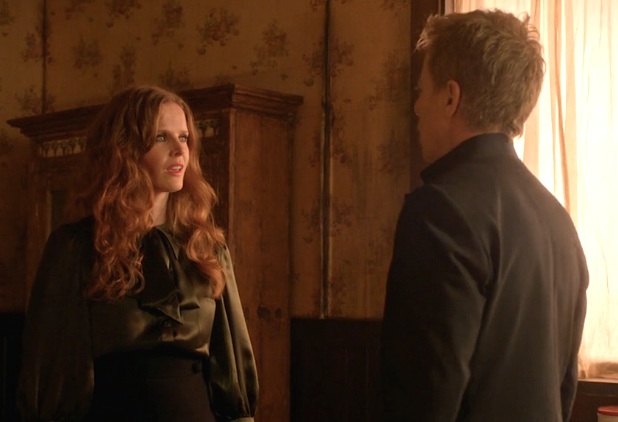 Yeah! [Laughs] That’s not flowers. So it’s like, “Hang on a minute, maybe I am being a bit too hard on him.” He does appear to be incredibly sincere, so she’s like, “If I don’t try, I’ll spend the rest of my life not knowing.” So why not try? I’ve already been disappointed by everybody in my life, so what’s one more? She’s always got her whiskey to drink in her kitchen if all goes wrong!

TVLINE | If Hades pulls this off, who minds the store down in the Underworld?
Well, if you fancy a move from TVLine, you’d be wicked at it, to be honest. [Laughs] He’s ready for a change of scenery, so I don’t think it’s his concern who replaces him!

TVLINE | Do the heroes get wind of his plan?
Regina gets wind of it and then she tries to break me and Hades up. She then faces a conflict of her own that’s really cool. I’ve finally started to get what I want and now Regina is ruining it again. She’s always the bloody sister to get what she wants, so why can’t I just have my happiness?

TVLINE | What are we going to learn from this week’s flashbacks with Younger Zelena and Younger Regina?
I am not allowed to say a thing. It’s too good! I can’t. It’s too good to spoil.

TVLINE | Would you say it covers a “formative moment” for the young women?
Oh yes. It’s definitely that. And it’s pretty groundbreaking. I didn’t watch the scenes, but I did meet my Mini Me (Isabella Blake-Thomas) and she’s really cute. She’s properly English and they dyed her hair red to look like mine, and her eyes are almost the exact same color blue as mine. The casting is really good.

TVLINE | Baby Hood will get a name by the end of the season. Did it meet with your approval?
It really does. It really does, yeah. It’s pretty amazing.

TVLINE | And lastly, what can you tease about the two-hour Season 5 finale (airing May 15 at 7/6c)?
Ohhhhh! [Laughs] I would say that you can’t write this stuff, but then they did. The finale is pretty bonkers….

TVLINE | [Series co-creators] Adam and Eddy told me that Sam Witwer and Hank Harris aren’t necessarily playing who or what it’s been reported they’re playing….
It’s an amazing set-up for next season. It’s really, really huge. I can’t wait until it’s out and we can talk about it!