The Grimm producers couldn’t have conjured better conditions for a location shoot if they’d had Adalind’s magic hat and all seven keys at their disposal.

It’s mid-February, and the recently renewed NBC drama is filming part of Season 5, Episode 18 at a park in Portland, Ore. A light fog settles in the early evening, making everything seem just a little more otherworldly than normal. On a paved path near a jungle gym, series star Reggie Lee stands very close to someone who looks an awful lot like… series star Reggie Lee — only the latter is sporting much more facial hair and a seriously Cro-Magnonesque brow. 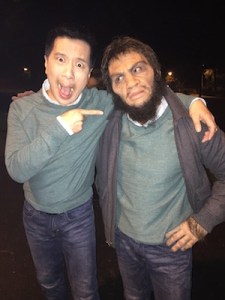 “I didn’t think I would ever be here,” Lee tells a group of reporters after posing for photos with Roel Failma, his stunt double for the episode. (While Grimm actors generally shift into their Wesen faces via CGI, their stand-ins wear special effects make-up, which looks better on camera in fight scenes.) “I always thought I was the human that was safe — I mean, ‘safe’ being a relative term in Grimm.”

In case you need a quick catch-up: Last week, we learned that lycanthropes are Blutbads suffering from a virus, and they’re the basis for the modern werewolf myth. One of the beasts scratched Lee’s Sgt. Wu during a chase; since then, he’s experienced increasingly alarming symptoms that make it seem like he’s turning into something other than human.

Just what Wu is becoming — Wesen? Something else? — remains to be seen, though we do watch him transform into some kind of pre-human creature (and back) in the episode.

Weeks later, TVLine catches up with the actor to talk specifics about the installment. First order of business? The utterly disgusting hairball scene that takes place when Wu wakes up after a nighttime hunt he doesn’t remember.

Lee laughs loudly as he recalls getting a text from producers James and Linda Kouf as they first saw the footage of Lee hocking up a wad of prop fur. “They said it was literally one of the two grossest things they’ve ever seen on Grimm,” he says — and remember, this is a show that in the same episode featured a birdlike monster who sucks the insides out of its victims and then regurgitates them so others can eat.

The prop department dabbed the ‘ball with some mouthwash to make it a bit more palatable, Lee relates. “My eyes were tearing up. It was fun! In an actor-y way, it was fun” He chuckles. “Oddly enough, the mouthwash helped.” He also had to figure out a new way to move and communicate, given that NeanderWu is “kind of primal” and “doesn’t really have any command of language.” 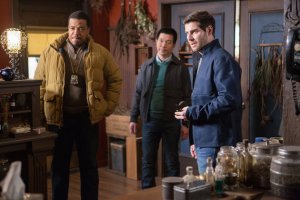 Next week’s episode finds the sergeant getting into a fight that ends with him worrying he might have done something very bad and terribly illegal. Not coincidentally, that’s also when members of Nick’s gang may become aware of Wu’s transformation.

“That’s where it starts to play into ‘I need your help, and I don’t know what’s going on,'” Lee says, teasing, “When you see a guy start to tear up, you know something’s going on.”

He adds that his character’s background as a police officer and overall standup guy makes him hope that this new development won’t turn him to the dark side. (Cough Capt. Renard Cough).

What do you think about Wu’s transformation? Sound off in the comments!