Nashville, when I said I wanted Maddie out of sight and more Rayna/Deacon scenes, this isn’t exactly what I meant.

Because Maddie’s decision to run away from home in Wednesday’s episode not only puts the hour’s focus on the truculent teen, it gives us plenty of Jaymes/Claybourne family turmoil that yes, gives us Rayna and Deacon in the same space, but also leaves the newlyweds snapping at each other in their worry over their missing daughter.

(Does anyone have Colt’s grandpa’s phone number? He’s got a track record of helping overindulged kids mature into young adults, and something makes me think a summer of mucking stalls, driving tractors and filling feed bins would do Maddie’s bratty soul a world of good.)

Elsewhere in the episode, the bane of Juliette’s existence turns into a great opportunity, Riff pulls a Lamar Odom and Will’s gaydar is seriously askew. Read on for the highlights of “Didn’t Expect It to Go Down This Way.”

CASH BLOCKED | Rayna returns from Dallas, has a debrief about Deacon’s night hauling their daughter out of the bar, then goes to Maddie’s room… to find her gone. Yep, Mads is AWOL, leaving Daphne feeling guilty about ratting her sister out and Deacon regretting the blind fury he injected into the whole affair. Young Miss Claybourne is hanging out at Cash’s house, but when Rayna storms in and scours the place for her kid, Cash snottily denies having seen her.

Back at home, the Maddie -apologizing this show is so good at continues when Rayna suggests that the teen is staying away because “We know Maddie’s got issues with your anger, and maybe she got freaked out.” Oh for the love of Conway Twitty, Ray, get a grip! Your kid is a spoiled brat, and that’s on you, too. Mr. and Mrs. Claybourne are very short with each other, but they manage to get their argument under control before saying something they’ll regret. (I’m going to ignore Rayna’s “Good Lord, Deacon, why’d you have to blow up on her like that last night?!” moment from later in the episode, because girlfriend is stressed.)

LET HER GO! | At Cash’s, Maddie laments that Rayna nixed her Sony record deal a while back. But Cash has contacts at the label; with a few calls, the offer is back on the table. She also informs Maddie that Edgehill wanted her as artist, too, which is news to the kid. And after Rayna swings by Juliette’s on the off chance her daughter is holed up with her idol — and has a very touching mama heart-to-heart with Ju (more Connie Britton/Hayden Panettiere scenes, please and thank you) — Deacon calls to say that Maddie is definitely at Cash’s.

Rayna hustles over there, only to have her older daughter defiantly announce that she’s not coming home, and she’s talked to a lawyer. “I’m emancipating from you,” she says, closing the door in her parents’ faces. As Rayna sobs on the front steps for the second time in the episode, Deacon can’t do anything except wrap his arms around her. 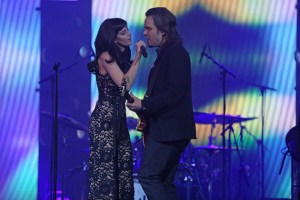 WHEELS (ALMOST) UP! | A close moment with Juliette during the Cadence hand-off freaks Avery out, so he makes the quick decision to join Layla on Luke’s tour as her band leader, and to take the baby with him. (Side note: Any of you music-industry types out there, please fill me in as to whether it is or isn’t weird to have a band leader sign on the day the tour begins?)

Juliette is irked by many things. 1) Her career needs a boost in the form of a new album, and Avery’s absence means he probably won’t produce a few tracks like she wants. 2) Avery’s closeness with Layla during a rehearsal for the tour’s opening night makes them seem quite cozy — cozier than they really are, but Ju doesn’t know that. And 3) Luke seems to be blowing her off (though he’s really not, but we’ll get to that in a wheelin’ dealin’ minute).

EVERYTHING OLD IS NEW AGAIN | Riff turns up in a New Orleans hospital, having suffered a stroke after consuming large amounts of booze, drugs and penis pills. Oh, and he was with a prostitute when it happened. The fame lifestyle is like a drug, his wife explains to Luke in the hospital waiting room, and he hadn’t been home since his performance at The Beverly a week before.

Thomas Rhett fills in for Riff on opening night; we see him perform “Die a Happy Man” for the crowd, who loves him. But he’s a temporary patch on the tour’s gaping wound… until Juliette waltzes into Luke’s dressing room right before he goes onstage.

Can we talk for a minute about Luke’s dressing room décor? Judging by the lifesize deer statues and those lamps on the bar, I’m inclined to think that Wheeler’s tour rider reads like the lyrics of Beauty and the Beast: “Venue agrees to provide one (1) case of bottled water, no fewer than four (4) bottles of top-shelf liquor, at least three (3) unopened bags of ice; Venue also agrees to use antlers in all of its decorrrrrrrrrating!” Anyway, Juliette wants to join the tour to fill the spot Riff vacated (which she vacated first), and Luke is on board. He announces the news during his set that night. “Now I get to spend plenty of time with Cadence!” Juliette chirps to Avery and Layla as she takes the stage; their stunned faces say everything.

MISTAKEN SEXUAL IDENTITY | Will hems and haws all episode about whether or not to ask one of his backup singers, a bespectacled possibly gay guy named Brian, out for a beer. Then he does. And Brian says yes. But Brian turns out not to be gay. Metrosexuals, man.

WHAT IS AUTUMN’S ENDGAME? | Autumn has clearly chosen the divide-and-conquer route when it comes to The Exes. The day their single, “The Rubble,” drops — and does really well — she pretends to be all girlfriendly to Scarlett, but warns Gunnar that in duos, “One always outshines the other.” And Scar gets the really wrong idea when she happens to witness Gunnar leaving the star’s hotel room and wiping her lipstick off his face.

Now it’s your turn. What did you think of the episode? Did anyone else notice that more than half the cast (Rayna, Deacon, Avery, Will, Layla and Maddie) were wearing gray sweaters during the hour? Just me? OK. Sound off in the comments!