The CW’s The Flash resumed Season 2 on Tuesday night with the promise to shed light on Zoom’s backstory and agenda, including how and why Hunter Zolomon came to be the sinister speedster.

Here is what we learned:

♦ Whereas Barry witnessed Reverse-Flash’s murder of his mother one night long ago, Earth-Two’s young Hunter Zolomon woke in the middle of the night to find his father James, home from “fighting for the country,” assaulting his mom. James then made Hunter watch as he shot her.

♦ Whereas Barry grew up in the loving care of the West family, Hunter was sent to a Dickensian orphanage, unwanted by any relatives.

♦ Hunter grew up to be a serial killer, convicted on 23 different counts. He was sent to a mental asylum where during one of his daily electroshock therapy “treatments,” he was exposed to Earth-Two S.T.A.R. Labs particle accelerator explosion, and turned into “as unstoppable monster.”

♦ Once Hunter saw our “other world,” he devised the plan to dress as The Flash — purely to give people “hope” which he would then “rip away from them” — and seek out Barry’s speed.

♦ How did Zoom kill “himself”? Hunter convinced a “time remnant” version of himself to be murdered for a greater good.

♦ Asked about the identity of the Man in the Iron Masked he has imposed on Earth-Two, Hunter gloated to Team Flash, “You wouldn’t believe me if I told you.”

All of the above was detailed 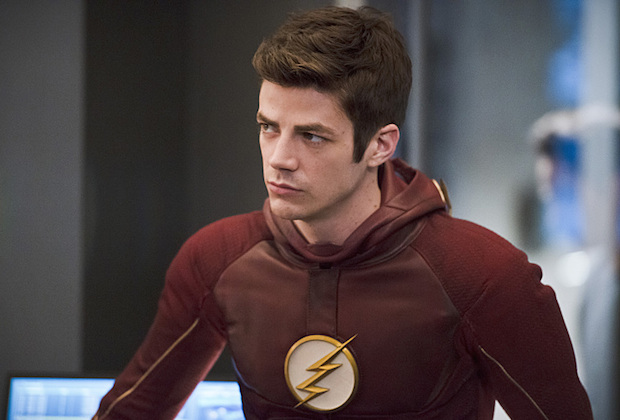 throughout the episode, in which Barry was determined to reopen a breach and stop Zoom’s reign of terror on Earth-Two. Though Wells vehemently opposed the idea, Joe convinced the professor to help Barry with this dangerous mission — and to that end he jerry-rigged Cisco’s “Vibe” goggles to help him manipulate the trans-dimensional energies and create a breach.

Cisco himself has reservations about it all — he sees himself as Anakin Skywalker on the precipice of becoming Vader — but Barry convinces him to partake in the plan, and he opens a breach, through which Zoom promptly leaps through. Barry, now four times faster thanks to the tachyon device, leads Zoom on a chase through the city and into S.T.A.R. Labs, where they waylay the baddie with images of his father and mother. Zoom is caught off guard, and zapped by Barry with the anti-metahuman cuff. It’s not that easy, though, to control the “darkness,” Zoom hisses, before freeing himself and setting out to prey upon Barry’s own family weakness, by taking Wally.

Joe, who was just making inroads with his son, barely brings himself to ask Barry for the ultimate sacrifice, but Barry agrees to surrender his speed to Zoom in trade for Wally. Once that exchange is made at S.T.A.R. Labs, Zoom goes to throttle Barry, but Caitlin appeals to the tiny shred of humanity inside her onetime lover. So Zoom lets Barry go, and takes Caitlin instead.

* In testing out the tachyon device outside the future Keystone City, Barry apparently made his trip to National City and back. Though without comment?

* Iris bailed on a date with Scott, confiding in an all-too-perceptive Caitlin that she can’t help but think that if she is to move on with her love life, it should be with Barry, who is her husband in the future and on Earth-Two.

What did you think of “Versus Zoom”? And what questions do you still have about Jay/Hunter/Zoom?