But when the highly controlled substance hits the street drug trade in tonight’s episode — the first half of the drama’s two-part season finale (10/9c) — we’ll see the chaos caused when absolutely anyone can tap into his or her hidden potential.

NZT’s effect on the populace “looks like the unimaginable made real all over the place,” executive producer Craig Sweeny tells TVLine. “A lot of crazy stuff is happening, as you can imagine, when the general public gets access to the drug.”

So what does this mean for Brian, who’s no longer working with the FBI and therefore doesn’t have access to the pill? Who made the drug available to the public? Will we ever find out what’s become of Piper? And is there a chance we’ll see Bradley Cooper’s Sen. Morra again before the season’s end? Read on for Sweeny’s teases of the final episodes, then make sure to scroll down for an exclusive sneak peek at tonight’s installment.

NZT FOR ALL! | The drug’s new availability means “We’ll see parties where everybody’s on NZT. We’ll see street crimes on NZT” and much more, Sweeny previews. 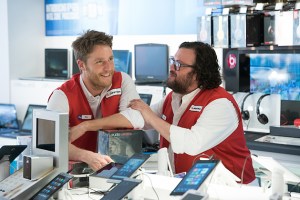 WHAT’S BRIAN UP TO? | “He’s trying to focus on maybe building a life of his own, but he can’t quite let go of where [Piper] might be and what might have happened to her.” Oh, and the first part of the finale begins a month after the events of the last episode, meaning “it’s been a while” that the assassin has been missing.

WILL WE GET AN ANSWER RE: PIPER? | “We will find out what happened to Piper” before the end of the two-part finale, the EP promises.

HOW ABOUT REBECCA? | “She’s also trying to figure out what’s going on with the so-called ‘Legion of Doom,'” Sweeny says. “She’s trying to finalize the connection. She’s trying to get Sands to talk.” However, Agent Harris and her team are “taken by surprise when, early on in the episode, NZT floods the streets… The ultimate question is: Who put it out there, and why? And is it part of a larger plan by Sands’ people?”

MORE MORRA? | “The last thing we saw Morra say, which was that this is no longer about the everyday perspective, that it’s not about who’s going to win control of this world, it’s about who’s going to build the next one? It’s actually the last thing we’re going to hear him say in the season,” Sweeny says. “He’s off doing something of great interest, but it doesn’t really have a lot to do with what’s going on with the between the FBI and Sands’ people.”

TELL US ABOUT PART 2! | Brian and the FBI are hit with what the official episode synopsis calls “a stunning betrayal to the team.” Also, Brian’s NZT immunity starts to wear off, causing a bunch more problems.

HOW DOES IT END? | The second part of the finale ends on a “very interesting reset, but it is not a cliffhanger,” Sweeny previews.

Press PLAY on the video below to watch a clip from tonight’s episode.